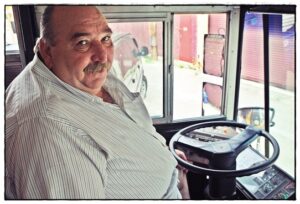 By Charles Sercombe
For sure, John “Hippo” Hypnarowicz was a big, barrel-chested guy.
Many folks would also point out that his heart was even bigger.
That spirit of generosity was snuffed out on Dec. 10, when COVID-19 caught up with Hippo and caused his death at age 68.
For 33 years Hippo, as everyone called him, drove a bus for the Hamtramck Public School District, before retiring in 2010.
For 16 of those years he bussed the district’s Special Ed students.
To him, the students were like family. So much so, he started throwing annual Christmas parties for the students – complete with lunches and free presents.
“The most cherished moments I had driving that bus were when I drove for the Special Ed kids for 16 years,” Hippo said, when he retired.
On top of that, he organized, through the Alhambra Caravan 261 of Warren, an annual free turkey giveaway to the families of those Special Ed students – sometimes, as many as 100.
Former schools superintendent Tom Niczay said Hippo was “a true warrior for Hamtramck Public Schools special education students.”
“He would hold a boat cruise fundraising event, partner with Srodek’s (Market) for turkeys for ‘his kids,’ and have them delivered to their families.
“He also secured tickets for the Shrine Circus and Tigers games. But beyond that, when he talked about ‘his kids’ you immediately knew how sincere he was about ‘his kids.’”
When he wasn’t at his day job, he and his wife, Mary, owned and operated their bar on Conant Ave., called – you guessed it — Hippo’s.
It may have been Hamtramck tiniest bar – which is kind of funny, given Hippo’s size and girth.
Unfortunately, the bar burned down in 2013 because of an electrical issue.
Hippo’s bar became part of the national trove of cinema trivia. The name of the bar wound its way into the movie “Grosse Pointe Blank,” which was partially filmed on location in Grosse Pointe.
A producer with the film saw the name of the bar and asked Hypnarowicz and his wife if he could use it for the fictitious “Hippo Club” in the movie.
Both John and Mary flew out to California to see scenes of the movie being shot, and had lunch with its stars, John Cusack and Minnie Driver.
Cusack, Hypnarowicz said, “was very personable. He didn’t have his nose in the air.”
Besides his wife, Mary, he is survived by John Jr. and D’Ann; he is the grandfather of Da-Shaun (Tony), Morgan, Leon Jr. Duece; and the great grandfather of Da-Shun.
He is also survived by his nieces and nephews Suzette, David, Kimmy, and Mikey, and many great nieces and nephews.
Hypnarowicz is pre-deceased by his parents Stanley and Paraska, and siblings Walt and Josephine.
Posted Dec. 18, 2020

One Response to COVID claims a hero