Cracking down on school threats 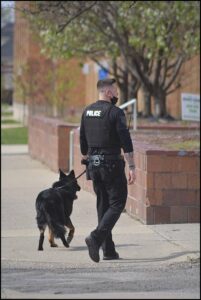 The Wayne County Prosecutor’s Office is warning students that there will be serious consequences for calling in threats.

By Alan Madlane
The Wayne County Prosecutor wants you to have a talk with your child.
Before her office has to.
In a recent letter to the public, the prosecutor’s office talks to parents – about parents talking to their school-age children.
Specifically, they want parents and other guardians to have conversations with students about making threats to their school.
Those include threats to teachers; other employees such as custodians, hall monitors or bus drivers; other students; or even just the school buildings or property, for example computers.
And believe us, she’s not making the laws up as she goes: Lawmakers across the county are tightening the language on — or passing completely new legislation to address — such threats.
While it is true that, “In many of these cases, the student… (was) just joking…’” or claimed to be, that doesn’t get them off the hook.
“When a threat is made, we cannot immediately know whether the threat is a serious threat, or whether the threat is meant to be a so-called prank,” said Prosecutor Kym L. Worthy, in her letter to the public.
So, they have to take every such threat, no matter how seemingly innocent or in jest, as real. To not so respond — and then, in a worst-case scenario, to have the threat turn out to be real — would put the county and other local officials in dereliction of their duties, legally liable, an so on.
The costs associated with responding to these threats, real or prank, are immense, in terms of money, time, loss of learning, creating lingering anxieties, and more.
And that means they will often come after the student, and even the parents as well, and probably come after them with a heavy hand.
Some older or recidivist teens could end up doing prison time – as much as 10 to 20 years, in some cases. And/or, convictions could result in losing scholarship opportunities, or financial aid, or forfeiting admission to college; or in expulsion; or worse, in a lifelong criminal background.
So parents, sit the kids down, even if they huff and puff and roll their eyes and say they know all this already, and go over it all with them one more time.
Posted Oct. 1, 2021