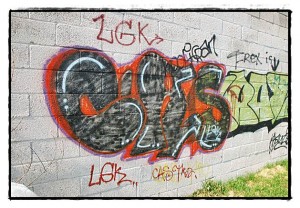 A series of graffiti tags have appeared on buildings in Veterans Park.

Devoted readers of Crime Log – and you know who you are – may feel like you’re having a déjà vu experience every time you indulge lately.

You are not losing your marbles!

There have indeed been repeats of some of the same types of crimes lately.

Specifically, the theft of catalytic converters from automobiles, as well as other vandalism to cars, such as the breaking off of mirrors, the breaking of windows, or in one recent case, a group spray-painting.

Also on the minds of the bad guys (and gals) is ID theft, where the criminal uses someone’s information to get money from other peoples’ rightful tax returns, state aid, etc.

Certainly, whenever the weather warms up for the first time in spring, there seems to be a mass unleashing of frustration. Older school kids, in particular, are getting mighty sick of being cooped up, and spring hormones are kicking in.

Also, there are simply more people out walking, which presents the criminal-minded with greater opportunity to strike.
There is also the ongoing menace of graffiti, particularly in the parks, and on commercial buildings (especially those which face alleys) or residential garages.

Detective Jackie Cracchiola of the Hamtramck Police Department is particularly interested in finding the individuals who’ve been spraying up Veteran’s Park, including the old skating rink.

“It looks so bad, it almost in effect ruins the park. No one wants to use it when it looks that way,” she said.

The graffiti has included a number of “tags” for a presumed wannabe gang (or looser group) calling themselves “LGK.” Detectives aren’t certain, yet, what it might stand for.

“We’ve got an idea on who at least one person is,” Cracchiola said. “Now it’s just a matter of being vigilant, and catching them in the act.”

In the matter of identity theft, common sense says to be aware to whom you give out your personal information. Also, as there have been instances of documents being stolen from vehicles, consider hiding these items, if you must leave them in your car. Turn them face down so information can’t be copied easily through a windshield.

Better yet, take the documents out of the car, and keep them safe at home.

The proximity of many of Hamtramck’s houses to one another, along with the fact that most are occupied at any given time, makes it tougher for criminals to be bold, so long as people are on the lookout, and willing to call police the moment they observe anything that seems suspicious.

The community truly is the extension of any good police department. Response time in Hamtramck is normally very rapid.

As for those catalytic convertor thefts, watch for people crawling underneath cars with what appear to be tools, especially if they seem nervous — for example if they are looking around first.

The rule of thumb is, with increased vigilance comes decreased crime.