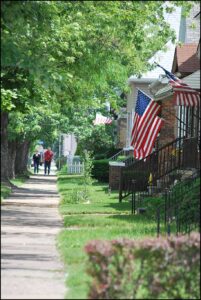 Now that warmer weather is here (cross your fingers), the incidents of street crime and property thefts have increased, which happens every year at this time. File photo

By Charles Sercombe
The weather has finally warmed up, and people are out and about.
And the return of spring also heralds a spike in the number of crimes – most of them of the misdemeanor variety.
We’re talking about an uptick in reports of disorderly people, porch pirates stealing packages, unwanted house guests, reckless drivers, people fighting, thefts from yards, break-ins, stolen cars, runaways, noisy house pets (such as dogs barking), noisy people (parties, people arguing), scam utility sales people, fraud cases, hit-and-runs, people causing property damage, suspicious people, heck even suspicious cars … and the list goes on.
So, what is it about the relationship between heat and crime?
Look no further than a 2017 study by researchers from Drexel University, a private research university out of Philadelphia, which scientifically confirmed that crime increases from May through September.
Those are the warmer months for most of the country, and the study also found that the hotter and more humid it gets, the more crime increases. This is especially true for domestic assault and other violent crimes.
There are more studies that back up this correlation, and police officers everywhere have long noted that warm weather means more crime.
So why is that?
Again, various researchers have tackled that question, and it won’t surprise you to know the answers, or at least the two main answers, are pretty obvious.
Here are some of the reasons, which one can find through a simple Google inquiry:
o There are simply more people outside and on the streets, and that includes those of the criminal persuasion.
o If it’s hot out, some folks like to drink more alcohol, and alcohol and violence too-often go hand-in-hand.
o When it gets super-hot, say in the 90s and above, we all get irritable. That means folks have shorter tempers, which in turn can trigger less self-control.
o If you live in a low-income area, chances are there are fewer air conditioning units, which means folks are getting less sleep and that, in turn, increases the irritability factor.
o Poverty, as well, adds to a general disposition of feeling down and low.
With climate change in the works, things could get worse. In other words, we may see longer warm days, and more extreme heat days.
So, what to do?
Well, drink plenty of cold beverages, but lay off the booze. Can’t afford an AC unit? Buy some fans – any little breeze can do wonders.
In general, if you feel anger coming on, take some deep breaths and walk away from trouble.
Also, keep on the lookout for suspicious behavior, and don’t hold back reporting something to the police department – no matter how trivial it may seem.
Posted May 13, 2022