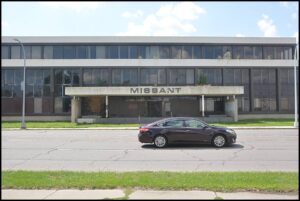 Among the many developments coming this year, the former Missant site on Conant will be transformed for an a-commerce company that sells truck parts. The company is investing $19 million to redevelop the site.

By Charles Sercombe
So, here we are in a new year.
What can Hamtramck expect over these coming 12 months?
Let’s clear off our crystal ball and take a look.
First up is the hiring of a new city manager. The deadline to apply for the position was this past Tuesday, and over 100 people have applied. Unfortunately for most of them, their applications were weeded out because they didn’t come close to having the qualifications the city was looking for.
That left just a handful of candidates for the city council and mayor to consider. It’s expected that a decision will be made fairly quickly.
As for other key department positions that became vacant in the past few months, those positions have been filled.
Development-wise, there has been a steady stream of small businesses opening lately, which has helped fill in some of the long-vacant storefronts that a certain property owner had stubbornly kept empty.
Word is, that property owner has sold a number of his buildings.
Over on Conant, the former Missant site will be getting a major redevelopment this year, now that the city finally OK’d a tax abatement deal that clears the way for a $19 million investment.
A number of the existing buildings, many of them dilapidated, will be knocked down, which will be that much less industrial blight we all have to suffer with.
Those vacant city lots have been selling at a pretty good clip. Those lots had to be held back from development because they were tied up in a complicated housing lawsuit the city struggled had with for some 40 years.
That lawsuit will finally be settled with the construction of three housing units – the last three out of 200 that had to be built.
The lots are being sold with the requirement that housing units are built on them. All of this means more housing, more people, and more people paying property and income taxes.
The new housing also comes at a time when there is a general housing shortage in the metro area.
In other development news, the ongoing repairs and improvements will continue at Veterans Park, and at the historic baseball stadium. The city has received millions of dollars to bring both back to life and, so far, there has been an amazing transformation.
The baseball stadium was once home to the old Negro League, and plans call for not only hosting baseball games, but also for the stadium to become an entertainment complex.
Think live music performances. Could Hamtramck be the next Pine Knob? Anything’s possible.
One key piece of the puzzle to putting the park and stadium back in shape is finding a new director for the city’s parks conservancy. That position became suddenly vacant a few months ago.
Who likes to go bike riding?
Believe it or not, not everyone. But despite some protestations, the city now has bike lanes along Jos. Campau that will eventually hook up with a walking/biking trail that will run through Hamtramck, Detroit Dearborn and Highland Park.
It’s called the Joe Louis Greenway.
One of the more exciting aspects of the Hamtramck trail is that a sizeable portion will run through the Campau alley, on the west side, from Caniff to Holbrook.
The city recently hired a design firm to sketch out the details for just how that will look – and some of the preliminary models suggest it’s going to be a cultural treasure.
Health-wise, the replacement of old lead water lines at homes will continue. The city recently was awarded $300,000 from the federal government to continue that program.
Eventually, either this year or next, the repaving of Caniff will continue. Last year, the repaving was completed from the I-75 service drive up to Jos. Campau.
Soon, the rest of the avenue will get dug up and replaced. Yes, that will cause a major traffic headache, but hey, that’s all part of progress.
In cultural developments, the city’s Arts and Culture Commission presented a number of events last year, and it’s expected even more will be offered this year.
Last year, it seemed that the city’s 100th anniversary made the Hamtramck Labor Day Festival extra special. We expect to see that civic pride continue this year.
The highlight of the festival was Hamtramck’s very own parade, and it was a smashing success. This parade will return as it replaces the Polish Day Parade, which high-tailed it to Warren after making Hamtramck home for decades.
Well, the images in the old crystal ball are beginning to fade, but there is still plenty more waiting to happen this year, so get lots of rest, and be prepared to have some fun.
Posted Jan. 13, 2023