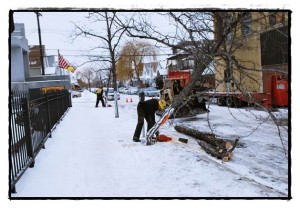 Hamtramck is a little less green.

Recently, 22 trees were cut down along the Jos. Campau business district because they were diseased or already dead.

The project was funded by the Downtown Development Authority at a cost of $3,500.

DDA Manager Darren Grow said he is applying for a grant to replace the trees, but he said it could take a year or so before he knows if a grant is approved.

The metal grates that surrounded each tree will be pried up later when warm weather returns.

This isn’t the worst blow to Hamtramck’s trees. A tornado, or what is believed to have been a tornado, touched down in Hamtramck in 1997 and wiped out over 500 trees.

A citywide effort helped replant many of those trees.