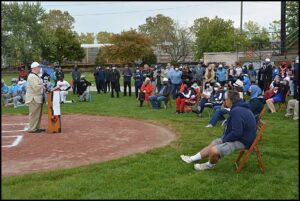 By Charles Sercombe
Legendary baseball player Norman “Turkey” Stearnes finally had his homecoming at Hamtramck’s historic baseball stadium.
Unfortunately, he died back in 1979.
But his two daughters were on hand to witness the official dedication of the stadium’s field — which has been named in Stearnes’ honor — on Tuesday afternoon.
Stearnes was part of the old Negro baseball league back in the 1930s, and played with the Detroit Stars at the Hamtramck Baseball Stadium, which was built in 1930 and is one of only a handful of such stadiums still standing. 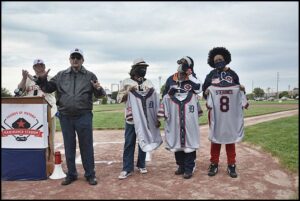 Norman “Turkey” Stearnes’ daughters and grand-daughter were given honorary baseball jerseys at this week’s dedication ceremony held at Hamtramck’s historic baseball stadium. The field was named in honor of Stearnes.

The stadium is undergoing a massive multi-million-dollar renovation, including a newly installed infield.
Mike Williams, President of the Friends of Historic Hamtramck Stadium, an organization that has been key in unearthing the historical importance of the site, said that the transformation of the stadium would make the former Negro league players “proud.”
Jaleelah Ahmed, the Superintendent of the Hamtramck Public School District, said the stadium serves as a “symbol of determination” for black players overcoming prejudice, and making their own mark in this country.
The Negro league existed at a time when the all-white major leagues barred African-American players. It wasn’t until the 1940s that the color line was broken in the major leagues.
Posted Oct. 2, 2020