Desi Pizza serves up a taste of the world 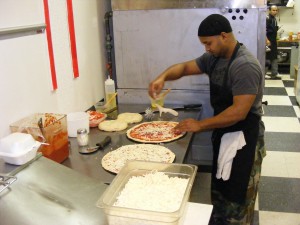 By Ian Perrotta
Review Staffwriter
Hamtramck just got a little tastier.
Last Thursday (Dec. 17) Desi Pizza became the city’s newest restaurant. And with a name that translates to “Country Pizza,” the eatery has a multicultural menu as eclectic as its patrons.
So which country does Desi Pizza represent? Take your pick. The one-stop-shop is 100 percent Halal (kosher) and serves up everything from Mexican quesadillas and Philly Cheese Steaks to Chinese food and Samosa.
“Our menu was inspired by talking to young people,” says Kazi Miah, who co-owns the restaurant along with chefs Alom Ahmed and Ismail Hossain. “We asked kids of all ethnicities what they wanted, and then based our menu on their responses.”
The results are some truly inspired dishes. Chicken Tikka Pizza puts a new spin on an old Southeast Asian favorite by using the traditional Chicken Tikka recipe as a pizza topping. Chicken Tikka also makes its way into a delicious fried rice concoction. Add the Malai Kabab Pizza into the mix and the international representation starts to rival that of the United Nations.
Desi Pizza also has more conventional items available. Because the restaurant used to be a Coney Island, traditional eats like coneys, gyros, burgers and fries are also offered. And a 99 cent value menu has proven to be especially popular with the after-school crowd.
It isn’t just the food that makes Desi Pizza a unique place to eat. Already, the establishment has begun selecting a “Customer of the Month,” with Conant Plaza Pharmacy earning the title for December. And coming soon, Desi will host a competition that challenges customers to submit their best recipe for inclusion on the menu. The winner gets the item named for them.
“We don’t want to be just a restaurant that serves people,” said Miah. “We want to be part of the community. Out of the 90 times a month that the average person eats, we hope you’ll choose us once, and I know our food and service will bring you back.”
If you do choose Desi Pizza, definitely try the Juicy Burger – there’s a reason it’s the most popular item on the menu. And don’t forget to try the Desi tea, which is a steal at 50 cents a glass, and, according to Hamtramck School Board President Titus Walters, “better than coffee.”
Desi Pizza is located at 2200 Caniff next to Steve’s Party Store and is open from 11 a.m. to 11 p.m. seven days a week, with extended hours on the weekend. Delivery is free with a $10 minimum order, and they are happy to cater to parties of five to 500. For more information or to place an order cal 313-365-0111.