Despite the pandemic, true love knows no boundaries 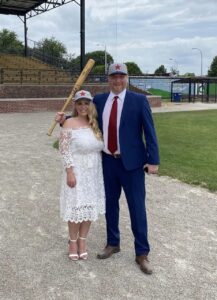 Hamtramck’s historic baseball stadium was the backdrop for an international love affair.

By Alan Madlane
You never know what a week in Hamtramck will bring.
Case in point: The wedding of Todd and Reyna on Sunday, July 17, believed by them to be the first ever held in Hamtramck’s historic baseball stadium.
Making things trickier, when they met (via a dating app), Todd lived in Canada while Reyna was living here in Michigan. Pandemic problems with border restrictions and the like, coupled with a visit to a psychic that brought a message from Todd’s late father, added up to a story, and how.
Here it is:

The Review: Todd, your last name is Shearon? What was Reyna’s maiden name? Did she change it to yours, or keep her own, or hyphenate?

The Review: So, you met on a dating app – care to say which (you don’t have to, obviously, but some inquiring minds etc.)? And this would have been somewhere in the spring of 2020, would that be about right?

Todd: Reyna and I met on a dating app called Hinge, “the (dating) app designed to be deleted.” I think it’s a cool tagline. We both deleted ours, lol.
We connected when she first messaged me in September of 2020, during the early part of the pandemic.

Todd: I was born and raised in Windsor, Ontario.
Reyna: I was born, and lived, in Sterling Heights until we moved to Rocky Face, Georgia when I was 3 years old. We moved back to Michigan when I was 8, and I have lived here ever since.

The Review: What drew you together – what did you find that you had in common? Did you take a honeymoon, and if so, where? Go to any more baseball diamonds?

Todd: Reyna initially messaged me after reading on my profile that we share an irrational fear of sharks. From there, our conversation grew from messaging to talking and facetiming for endless hours, sharing stories and learning about each other.
We were both working remotely from home and in off-and-on lockdowns due to the pandemic, so we had nothing but time.
I don’t think we’ll take our official honeymoon until next spring, after we renew our vows with our family and friends in a more traditional wedding ceremony.
We went to see the Blue Jays host the New York Yankees in Toronto back in May, when we were returning home from Montreal where I did my (K-1) visa interview at the U.S. Consulate. I’m sure we’ll go to a few games before this season is over.
Reyna isn’t a big baseball fan, but she enjoys going to the games. As for me, she knew what she was in for early on when she learned that I set an unofficial world record for attending all 30 major league stadiums for a game each, within 28 days, in 2007.
During a road trip to visit her family in Florida last summer, we went to games along the way in Cincinnati, Miami, Atlanta, and Detroit, two of which I hadn’t been to before because they were opened after my (earlier) stadium tour (that would be Miami [2012] and Atlanta [2017] – ed.).
We also went to a game in Toronto after she was able to visit Canada.

The Review: The psychic is interesting. How did Reyna find her? Is she from the area? Was Ty Cobb Field important to your dad, Todd had he been there before (Todd’s dad suggested, through the psychic, that they marry at Ty Cobb field in Leamington, Ontario; oddly, Ty Cobb threw out the ceremonial grand opening first pitch at Hamtramck Stadium. Cue the chills! Not enough? Turns out their wedding date was also the anniversary date of Cobb’s death! – ed.)? 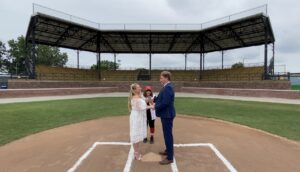 Todd: My father was a huge baseball fan, and he always talked about the greats, but his favorite was Ted Williams. My father is the reason for me loving the game as much as I do. He had been there a bunch of times in his life.
I remember him taking us there (Ty Cobb Field) as kids, but I didn’t remember (it). It’s not the focus when you go there. It’s all about the birds (the field is located within Jack Miner Bird Sanctuary).

Reyna: My friend Miranda was telling me about her amazing reading with Julia Mary (Royal Oak) and suggested I go see her. I had never been to one (a psychic medium) before, and since I was single for the first time in a long time (and had no clue what my future would hold), I thought it would be fun to see what she had to say, or if any of my relatives would surface.
I hadn’t even (known) Todd for two weeks and she told me I was going to marry the guy.
One year later, I surprised Todd by booking us a couples’ reading with her. His father came through, and said we should get married at Ty Cobb Field at Jack Miner’s Bird Sanctuary in Canada.
This isn’t something we could do, as per Todd’s visa, but we visited the field before Todd moved here in early July.

The Review: When exactly do you think you’ll have your full wedding celebration? Will you keep it here in Hamtramck, or don’t you know?

Todd: We’re looking to have our full wedding celebration in spring of 2023, once border restrictions get more back to normal and all of our closest friends and family would be able to attend.

The Review: Tell us a bit more about your Canadian television news appearances – why was it considered a story?

Todd: Our love story was featured on CTV News Windsor, as well as nationally. If anything, our story was something happy and positive to share with the community during a pandemic filled with despair, uncertainty, and fear of the future. Two people meeting from two different countries during that time seemed almost unrealistic.
The other side of the story was that the land borders were closed, and Canada wasn’t allowing anybody into the country who wasn’t essential. I made my way to Detroit two months after we started talking to finally meet her, but I had to first drive four hours to Toronto to fly to Detroit — which I could originally see from the front porch of my house.
I proposed on New Year’s Day 2021 during a visit. I flew to Detroit multiple times before lockdowns got worse, and then we couldn’t see each other for over six months due to lockdowns and travel restrictions before I flew over for a six-week vacation last summer.
CTV continued to reach out to us when the Canadian government teased us with the potential loosening of border and travel restrictions. Canada finally opened its border to American travelers in August 2021, and the U.S. opened theirs in November 2021 to those who had been fully vaccinated.

The Review: Great story, to be sure. Any last thoughts or info?

Todd: The other amazing thing about our wedding day on Sunday, July 17 was that there were baseball games scheduled all day from 8 a.m. to 6 p.m. Two days beforehand, the weather forecast showed a day full of thunderstorms, to the point that all games were cancelled.
The night before, I was so stressed out that our day wasn’t going to happen as planned, but Julia told us it was the day it was meant to be and not to worry. Sure enough, when we woke up Sunday morning, the forecast had completely changed and we had a perfect day at the ballpark. The rain didn’t show up until later that night.
You can say what you want about psychic mediums, but Julia Mary was right again.
Through this experience, we feel that we will always have connections to both Ty Cobb, and the city of Hamtramck.

The Review: Thanks! And congrats!
Todd and Reyna: Thank you so much for sharing our love story, and for your congratulations!
Posted Aug. 12, 2022

One Response to Despite the pandemic, true love knows no boundaries