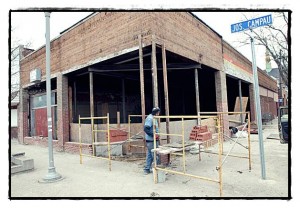 No, it’s not going to fall down.

That’s the verdict from Martin Ladd, the city’s director of the Public Services Department, about a redevelopment project going on at a building on Jos. Campau and Poland.

A city contractor, Steve Shaya, raised concern over whether the building is going to hold up because much of the front and side of the building had been removed.

Ladd said that while it looks like hardly anything is keeping the structure standing, there is indeed sufficient support. He said the city’s structural engineer investigated the building and determined it was sturdy.

Still, to the casual observer, the building looks like it could collapse at any moment. On Monday, however, a new brick wall was going up.

“It’s going to look like hell for a while, but it’s structurally sound,” Ladd said.