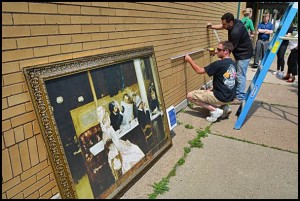 A replication of an art masterwork from the DIA collection is installed at Café 1923, the first of six sites in Hamtramck to receive other replications.

Can’t make it to the Detroit Institute of Arts?

Well, put on your walking shoes because the DIA has come to Hamtramck. Recently, the museum installed six reproductions of masterpieces from its famous collection.

Hamtramck is one of 12 communities participating in the DIA’s Inside/Out program.

The first replica to be installed was at Café 1923 which — appropriately for the coffee house — displays Henri Gervex’s “Café Scene in Paris,” a 19th Century scene of people in a café.

The city’s Downtown Development Authority will be sponsoring walking tours of the collection in the coming weeks. Here’s the schedule for that:

The tours begin at 7 p.m., starting at the first location.

Hamtramck will also have its own special weekend at the DIA, Aug. 10-11. Residents will get free admission and several discounts at the gift shop and CafeDIA as well as other specials.