Dickinson East gets a ‘Super’ treat with guest reader 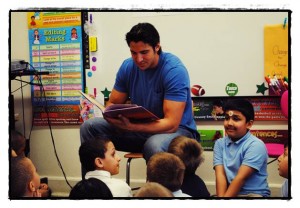 What’s more nerve-wracking than playing a football game in front of 111 million people on live television? According to Super Bowl XLV champion Frank Zombo, the answer is reading a book to a class full of third-graders.

Zombo, a linebacker for the Green Bay Packers, was at Dickinson East Elementary School on Tuesday (March 22) to help celebrate Reading Month. He was invited by third grade teacher Rebecca Ruzycki, who went to Zombo’s alma mater at Central Michigan University and knew his future father-in-law through the Moose Club.

At six-feet four-inches tall and weighing 254 pounds of pure muscle – just ask the teachers who were reduced to giggling schoolgirls after he flexed – Zombo towered over the tiny 8- and 9-year-olds as he showed them his game jersey and fielded questions about everything from reading to life as a professional athlete.

Before he began reading his story out loud, Zombo also gave some advice to the class on how to be successful in life, telling them to “pay attention to [their] teacher,” and that “character and grades are the main thing.” He also told them to never give up on their dreams, as he himself went from an undrafted free agent to winning the Super Bowl all in his rookie year.

The main event of the day was when Zombo read to the children, and he did not disappoint. After choosing “The Legend of Mackinac Island” out of a stack of books, he regaled the kids with a tale based on the Native American legend of how Mackinac Island was formed – and he even added sound effects.

To show their appreciation, Ruzycki’s third-graders made Green Bay Packer pennants and put together a gift-bag from The Dolphin Store (an in-school supply store) that included a water bottle, stickers, pencils, a bookmark, a reading light and a highlighter that smells like buttered popcorn. Zombo thanked the class and then left, but not before delighting them with a small confession.

“I was definitely more nervous reading today than I was for the Super Bowl,” he said. “Football I’ve been doing my whole life, but this is something different.”