Dig history? If so check out this archaeological discovery 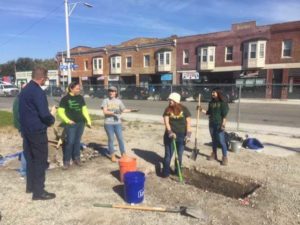 Wayne State students will be excavating the site of Hamtramck’s former municipal building on Jos. Campau and Alice. The public is invited to stop by and watch the process.

By Alan Madlane
Hamtramck is a city with a past. Several of them, you could argue.
Now that past, or part of it at least, is being revealed. Or, re-revealed, if you like.
Archaeology students from Wayne State University, under the watchful eye of Associate Anthropology Professor Dr. Krysta Ryzewski, are excavating the old Village Hall down on Jos. Campau between Alice St. and Grayling St. According to Hamtramck historian Greg Kowalski, this is the first comprehensive dig ever in the city.
The key word in that statement is “comprehensive.” There was some digging done in 1981 at the old Dodge Main plant during its demolition. But none before to this extent.
In its heyday, the building actually contained not only some city offices and the fire and police departments, but additionally some houses, an unidentified store, and the wonderfully named Nut House Bar. There were also some small out-buildings on the property, one of which likely served as a stable for the police horses.
If all this sounds interesting to you, well then the best news is yet to come: not only can you observe the Monday afternoon digs through next month from the Jos. Campau sidewalk, this coming Saturday, Oct. 27, from 10 a.m. to 1 p.m. you can also participate in an “open day” at the site.
The Wayne State students will welcome you to view some of what they’ve discovered so far, and learn more about the dig right there where it’s unfolding. This event is free of charge.
Finally, on Dec. 10, the students will conduct a formal presentation of objects found during the dig, at the Hamtramck Historical Museum at 9525 Jos. Campau.
Call (313) 893-5027 for more information about this event. So far, pieces of assorted old metal items and glass bottles, and even a bullet, have been found, among other items.
So, here’s to looking forward to learning more about our past.