Disturbance at medical clinic opened door to shutting it down 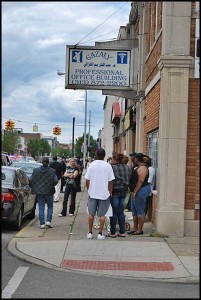 A disturbance last June at the Qandil Family Medical & Urgent Care Center on Jos. Campau led to an investigation by the DEA into illegal prescriptions.

June 4, 2012 was probably the day that sealed the fate of Dr. Basil Qandil, whose Jos. Campau medical clinic was shut down last week following a raid by local and federal investigators.

The reason for the raid at the Qandil Family Medical & Urgent Care Center, according to a criminal complaint filed in federal district court, was that the doctor was prescribing controlled drugs to just about anyone who walked into his clinic.

So what set off the investigation?

First off, prior to the raid it was obvious to the public that something was going on because there was always an all-day line of “patients” waiting to get into the clinic.

But on June 4 of last year, things got out of hand when patients began fighting among themselves, apparently in a dispute over who was next in line.

Hamtramck police officers responded, and they noticed about 100 people waiting in front of the business, 20 people in the clinic lobby, people sitting in storage areas, in back rooms and even the rear patio.

Speaking to officers, Dr. Qandil said he operates a walk-in clinic and that the large crowd was due to him being out of the country, in Jordan, for two weeks.

Qandil also volunteered that he sees about 40 to 50 patients every 30 minutes, a number that alerted officers at the scene.

According to the criminal complaint filed in federal court: “When asked how he could possibly treat that many people in 30 minutes, Dr. Qandil had no explanation.”

Several days later, a woman outside the clinic flagged down police officers and complained that Qandil refused to see her because she did not have $800 in cash. The woman told police that in the past Qandil attempted to sell her prescriptions for Oxycodone and Opana.

Both drugs are highly addictive pain killers that are popular among street drug abusers.

Upon further investigation, it was revealed through a state system which tracks what doctors prescribe Qandil had prescribed over 1 million dosage units of controlled drugs, including oxycodone and vicodin.

Agents with the DEA then got involved in the investigation. They discovered patients were coming from as far as Toledo to get prescriptions. Agents also combed through records discarded in the clinic’s trash as well as from Qandil’s home in Dearborn Heights.

Undercover agents wearing a recording device were also sent to the clinic to record their encounters with Qandil.

Qandil would spend less than two minutes interviewing the undercover agents before agreeing to write prescriptions for controlled substances – all without a physical check of the “patients.”

In one month’s time, Qandil issued over 4,000 prescriptions – the second highest in the state, right behind the University of Michigan hospital network.

The cash flow is now shut off for Qandil as he awaits further legal action. Unlike the common street drug dealer who is caught dealing drugs, Qandil is not in custody, said a media spokesman for the DEA.

The maximum penalty for the charges he faces was not immediately known. The DEA spokesman said the investigation is still ongoing.