DTE promises to come back in spring and replace sidewalks 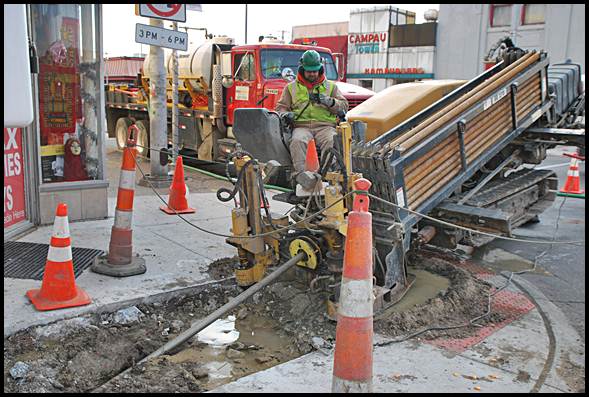 The replacement of DTE Energy gas lines has caused massive disruption throughout the city. Some residents are complaining about the temporary sidewalk slabs being installed – but there is a reason for it city officials say.

If you haven’t noticed, this city is all torn up.

DTE Energy has been ripping up sidewalks throughout town since last summer to upgrade its gas lines.

That’s all been good, but in the meantime residents have had to deal with closed streets and trying to find a place to park their cars, often blocks away from their home.

Again, in the big picture of things, its pays off.

But now there is a new wrinkle.

Residents are complaining that once the gas line replacement work is completed, the sidewalks are being shoddily replaced with a couple of inches of cement.

No need to worry, says Public Works Department Director Steve Shaya. There’s a method to this madness, he said.

Since there are so many sidewalk slabs that need to be replaced and so little time to do it before cold weather sets in, Shaya said he told DTE to pour a temporary cement slab of two inches – instead of the standard four inches.

“It’s just to get us through the winter,” he stressed.

Shaya said the plan is to have a DTE contractor come back in April and remove the temporary slabs and put in a proper sidewalk.

Acting City Manager Kyle Tertzag also pointed out that DTE initially planned to hold off on replacing the sidewalk slabs until next spring. He said the company was going to leave the sidewalks covered only with gravel.

“We weren’t going to allow that,” he said.

It’s estimated that there are a few thousand slabs that will be eventually replaced.

So, how do we know DTE will keep its word?

“I have it in writing,” Shaya said.