Easter: Times change but the spirit remains the same 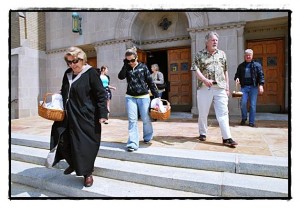 There’s a different feel to Easter, compared with other Christian holidays.

That may be because there is less commercialism attached to it like there is in the weeks — now months — leading up to Christmas. And Easter is a harbinger of spring, when we are at last breaking free of the long grip of winter.

Easter is the holiest of all days for Christians around the world, and this has been especially true in Hamtramck.

Hamtramck grew from a small farming village of 3,500 people in 1910 to an industrial city of 56,000 by 1930. Almost all of these new residents were Polish immigrants, who came here to work at the Dodge factory and 23 other factories that opened in the city.

And almost all were Catholics, who brought their faith with them from Poland, where Christianity has been the predominant religion for now more than 1,000 years.

The Poles joined a small group of Ukrainians and African-Americans here who also were mainly Christian. For all these groups Easter was a special time. And it was more than just a day. Holy Week leading up to Easter was — and still is — marked nearly every day with religious observances culminating with Easter Sunday Mass.

In the days when Poles made up more than 80 percent of the city’s population, the Easter celebration had an impact on the entire town. In the weeks before Easter, stores promoted flowers and new attire.

In 1945 Edwin Furs at 9243 Jos. Campau promoted a “Great Easter with a fur scarf” (silver fox — $67). And Easter simply wouldn’t be Easter with a ham or kielbasa from Kowalski, or one of the many meat markets in town. This would be combined with bread, butter, and decorated eggs, usually dyed in a pot of boiling onion peels, then packed in a basket with assorted other items and toted to church on Saturday afternoon to be blessed.

The tradition — maybe not so much the fur shopping — continues today. But not to the magnitude it did in those years when Hamtramck’s population was far larger and less diverse.

Between noon and 3 p.m. on Good Friday, the hours when Jesus suffered on the cross, Hamtramck virtually shut down. Stores closed. The library shut its doors, city operations were suspended and everyone went to church. No one even discussed the concept of the separation of church and state, and no one complained.

The churches were packed with people. In 1956 the City News reported that an estimated one million Catholics across Wayne County were expected to attend Good Friday services.

The City News, incidentally, was a politically alternative newspaper founded to compete with The Citizen newspaper. It devoted the entire front page of its Easter edition to a large Easter drawing.

Inside it carried a full page of Easter ads from such legendary Hamtramckans as Walter Paruk, who later would become municipal court judge; future Mayor William V. Kozerski; businessman Stephen Wrobel and Councilman Henry Kozak. Another full page of the paper was devoted to Easter stories entirely in Polish.

Easter Sunday, of course, was the most important day. Masses were huge. Groups like the Knights of Columbus paraded into the church and Mass was a joyous occasion. That would be followed by a massive Easter dinner later in the day.

Not all of this has changed, of course. The Masses are still held. Families still take baskets to the church on Saturday to be blessed and many people take off from work between noon and 3 p.m. on Good Friday to go to church.

The biggest difference between then and now is scale. In days past, kids from St. Florian, St. Ladislaus and Queen of Apostles schools would pack the churches six days a week. And their parents would join them, along with many more, on Sunday. Today the schools have been closed by the Archdioceses, and replaced with charter schools. Hamtramck is far more diverse, and church attendance is declining in many parts of the world.

It doesn’t do any good to lament what we have lost through the years. But it’s possible to cherish the past while focusing on the future. After all, Easter is a time of renewal, and it looks like it will be celebrated for many years ahead.

Greg Kowalski is chairman of the Hamtramck Historical Commission.