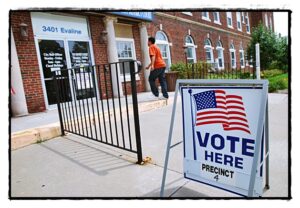 By Charles Sercombe
Hamtramck voters, like voters nationwide, are coming out in droves for Tuesday’s election.
Over 5,600 voters have received absentee ballots, and over 3,600 of those ballots have already been returned.
By the looks of things, next Tuesday’s presidential election could exceed the turnout in 2016. In that year, over 6,200 local voters participated.
On Tuesday, we could see that number shoot up to 8,000 – which would include those voting by absentee ballot.
And for those who have yet to return their absentee ballot, Secretary of State Jocelyn Benson is warning voters that it is likely too late to rely on the post office to deliver your ballot on time to be counted.
“We are too close to Election Day, and the right to vote is too important, to rely on the postal service to deliver absentee ballots on time,” said Benson in a press release, issued earlier this week.
“Citizens who already have an absentee ballot should sign the back of the envelope, and hand-deliver it to their city or township clerk’s office or ballot drop box as soon as possible. Voters who haven’t yet received their ballot should go to their clerk’s office to request it in person. They can fill it out, sign the envelope and submit it all in one trip.”
While there has been concern about voters spoiling their absentee ballots by not including their signature where required, Gitschlag said that rarely happens in Hamtramck.
“We do not spoil ballots for not having a signature,” Gitschlag said, in an email to The Review. “We send the voter a letter telling them they did not sign their envelope, and must come in and sign it. If they don’t come in, it is rejected after 8 p.m. on election night.”
Besides the presidential election, Hamtramck voters will be faced with three ballot proposals.
Proposal 1 and 2 ask voters to decide whether to eliminate the language in the city charter that establishes the police and fire departments, and their respective chiefs.
If voters say yes to both, it would then be up to the city council to come up with a way to provide those services.
Advocates of the proposals say that finding an alternative way to provide police and fire services will save the city money.
However, no alternative plan has been presented.
Opponents say that passing the proposals will result in inferior police and fire services.
The third ballot proposal asks voters to allow the city to increase its half mill property tax, that goes toward paying police and fire pensions, to up to 10.5 mills.
That increase will generate $2 million a year, which is the cost to fund the pensions.
The city is now in deficit spending and will likely exhaust its budget surplus soon. If no financial savings are found, it is likely the city will have to seek the help of state officials, and even face once again being placed under emergency management.
For those voting in person, polling precincts open at 7 a.m. on Tuesday, and close at 8 p.m.
Gitschlag said that he doesn’t expect to have Hamtramck election results until late on election night, or even the next morning.
Posted Oct. 30, 2020