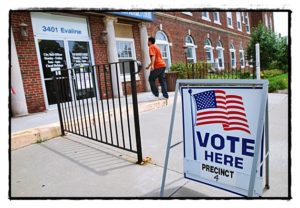 By Charles Sercombe
If you haven’t mailed in your absentee ballot yet, consider another way.
Instead of mailing, take your ballot directly to Hamtramck City Hall, and either drop it off inside at the City Clerk’s Office, or outside in the official ballot drop box – located directly across from the front doors of the building.
That’s the word from State Secretary of State Jocelyn Benson, who is saying that relying on mail delivery at this point may not guarantee that your ballot will get to your local city clerk in time for the Nov. 3 General Election.
Any ballot not received by election day will not be counted.
“Only the absentee ballots received by 8 p.m. on November 3 can be counted, and voters should not risk possible postal delays this close to the deadline,” Benson said in a recent press release.
With this being a heated presidential election, Hamtramck’s voter turnout is set to become historic. In fact, the duel between President trump and former Vice President Biden will likely set voter records nationwide.
In Hamtramck, there have been over 5,000 absentee ballots issued so far, said City Clerk August Gitschlag, and already about 2,600 have been returned.
Many voters here and nationally are voting by absentee ballot because of the ongoing spread of COVID-19.
Gitschlag said that, compared to the last presidential election four years ago, there were a total of 800 absentee ballots cast.
This could mean that there will be about 9,000 Hamtramck voters participating in this year’s election. There are over 13,000 registered voters in Hamtramck.
Besides the presidential election, there is an election for an open seat in the state legislature to fill the late Rep. Isaac Robinson’s position. He died this year of COVID-19, while still in his first term.
The district includes Hamtramck. A Hamtramck Democratic candidate, Abraham Aiyash, is the one thought to be likely win, since Hamtramck has traditionally backed Democratic candidates.
He faces a little-known Republican challenger, Howard Weathington, as well as Working Class candidate Linda Rayburn and an independent candidate, MD Rabbi Alam.
Alam has been active in local Bangladeshi political circles and has run for office before.
There are also three Hamtramck city proposals. Proposals 1 and 2 have created the most controversy. Both are city charter revisions that, if approved, would eliminate the establishment of the police and fire departments and their respective positions for chief from the charter.
If approved, the city council would then decide how to provide those services.
There has been considerable backlash against the proposals, over fears that Hamtramck would end up receiving inferior police and fire protection.
Proponents of the proposals say that adequate services would continue, and that there would be a financial savings.
No alternative plan for providing these services has been presented.
A separate city proposal would raise the property tax that goes toward paying the city’s police and fire pension costs, from a half mill to up to 10.5 mills. The current millage rate does not come close to meeting the city’s costs.
There has been little promotion or public discussion about this proposal, although it is generally thought that voters will likely reject such a significant tax increase.
Posted Oct. 23, 2020

One Response to Election countdown begins