Election is already heating up in city hall 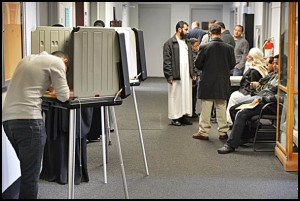 On Monday, 175 voters came to city hall to vote by absentee ballot.

Voters wasted no time casting their ballots in Hamtramck.

On Monday, a day before election day, dozens of voters took care of two things in one visit to city hall: They paid their water bills and voted by absentee ballot.

Outside city hall, city council candidates Abu Musa, Mohammed Hassan and Showkat Choudhury spoke to fellow Bangladeshi-American voters, urging them to vote for them and as well as vote by absentee ballot.

Musa was seen walking voters into city hall and helping them with the ballot.

Deputy City Clerk August Gitschlag said although normally candidates and their campaign helpers have to stay at least 100 feet away from voting precincts, city hall is an exception because it is not a precinct.

As of Monday, Gitschlag said 1,181 voters requested absentee ballots and that over 700 had thus far been returned. That number is unprecedented. In prior years, no more than 300 voters would vote absentee.

In order to vote absentee, according to state election law, voters have to cite one of the following reasons: 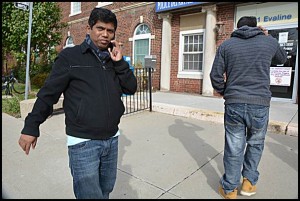 City council candidate Abu Musa threatened a Review reporter with legal action for taking his photo while in front of city hall.

Gitschlag told The Review that the two most common reason voters were voting by absentee ballots were for religious reasons or because they were expecting to be out of the city.

Outside city hall Monday afternoon, council candidate Musa got testy with a Review reporter for taking his photo.

“Why did you take my photo?” he repeatedly demanded to know.

The Review reporter repeatedly told Musa it was because he is a candidate.

Musa claimed that it was a violation to take his photograph and told the reporter that he would contact his lawyer.

“I thought it was underhanded, maybe legal, but not ethical,” Majewski said.

Majewski is seeking her third term and has a fight on her hands. In the Primary Election she came in second, 62 votes behind Abdul Algazali.

This is the second time Algazali is attempting to unseat Majewski. He decided not to seek re-election to city council to challenge the mayor.

Majewski said that while campaigning on Sunday, she left campaign literature at the house where Musa says he lives, 11651 Moran. She said that after she left, a man came out of the house and invited her in.

The man told Majewski that Musa does not live at this address.

The Review called Musa for comment, and he said that he lives there with relatives.

“You tell her (Majewski) that she is lying,” Musa told The Review.