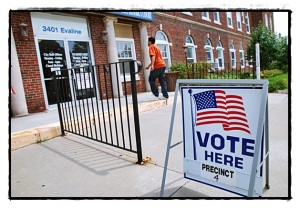 Hamtramck’s growing Bangladeshi-American community continues to flex its political muscle, but it’s not yet strong enough to carry its candidates into state office.

The four Hamtramck candidates who have received support in the past couple of years from the Bengali community finished a far distance behind in the race for state Representative. The voter turnout for Tuesday’s Primary Election was larger than in 2008, which political observers say is due to the Bengali voting bloc that appears to be getting stronger.

Tuesday’s voter turnout was 2,099, some 500 higher than in 2008 when the last election was held for state Representative.

This may signal that next year’s election for two seats on City Council will likely go to Bengali candidates, which would make the council a Muslim majority.

However, by that time, the city may be financially broke and under the supervision of a state-appointed emergency financial manager.

But that’s another matter.

Tuesday’s election brought about a number of upsets, some large and some small. Locally, Hamtramck’s representative in the Wayne County Commission, Moe Blackwell, was booted out of office.

His replacement, Martha Scott, is no stranger to Hamtramck. Scott was termed out of her state Senate seat. Scott won her old position on the commission handily, winning a whopping 49 percent of the vote.

City Councilmember Tom Jankowski came in dead last in the county commission race despite winning the majority of Hamtramck votes. Jankowski once worked for Blackwell and his entry into the race was perplexing to say the least.

If he had hoped to detract votes from Scott, it backfired. Even if Blackwell could have picked up Jankowski’s votes he still would have lost by a significant margin. What could have been hurting Blackwell’s chance to win was the attention his uncle, Art Blackwell, has received in recent months for being charged with embezzling money from Highland Park when he served as an emergency financial manager.

U.S. Representative Carolyn Cheeks Kilpatrick was also knocked out of office, most likely because of the crimes committed by her son, ex-Mayor of Detroit Kwame Kilpatrick.

In the race for the empty seat to replace Scott in the state Senate, Bert Johnson easily cruised into victory. Johnson ditched a chance for a guaranteed re-election as state Rep. to go after Scott’s seat, a gamble that obviously paid off.

Hamtramck voters took a different path from fellow Democratic voters in the state and supported Andy Dillon as governor. Those voting on the Republican side – all 303 of you, went for Rick Snyder, who also won the primary in what is considered a major upset.

A majority of Hamtramck City Councilmembers, Cathie Gordon, Tom Jankowski, Kazi Miah and Mohammed Hassan, may have squandered a chance to bring in extra revenue through a voter-approved property tax increase.

An overwhelming majority of special tax proposals to support items such as libraries and police service were approved by metro area voters.

The aforementioned councilmembers refused to allow voters in Hamtramck a chance to vote on allowing an extra 2.3 mills to be raised to help offset the city’s projected $3.3 million budget.

Mayor Karen Majewski, who supported a tax increase, said Tuesday’s election results shows that even in hard financial times when many families are struggling to make ends meet, voters “recognized what has to be done.

“I think our voting constituency would have supported a public safety millage,” she added.
(Contact Charles Sercombe at cs@thethehamtramckreview.com)

One Response to Election produces some upsets large and small