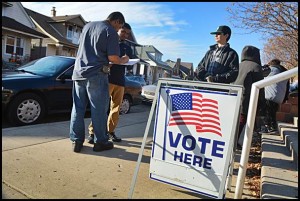 By Charles Sercombe
Hamtramck’s Primary Election is coming up in four weeks.
But taking a look around town, one would hardly notice. There are just a few candidate signs to be found around town. But then, that’s been the trend for the past several years.
Hamtramck’s politics – once a lively sport in town – is now more subdued.
Campaigning is largely confined to candidates meeting within their own social circle – networking, as it is referred to.
However, the Detroit League of Women Voters hosted a candidate forum on Thursday evening, the day The Review went to press.
You can read more about the event in next week’s issue.
Not all candidates have been stealth-like. Some have been actively campaigning, such as Carrie Beth Lasley, who has been going door-to-door.
Justin Jessop has been seen riding his rickshaw through the neighborhoods.
Robert Zwolak, a perennial candidate who occasionally gets elected, has been planting his campaign signs – signs that he has had, maybe, since the 1990s? – in all corners of the city.
In fact, one was placed near the Russell Industrial Building, which — although it is in Detroit — is on a backroad that many Hamtramckans take to avoid the I-75 traffic.
The only local race is for three seats on city council. Out of the nine candidates facing off in the Aug. 6 Primary Election, the top six vote-getters will move on to the November General Election.
The other six candidates in the election include Nayeem Choudhury, Mohammed Alsomiri, Anam Miah, Abu Musa, Saad Almasmari and Mohammed Hassan.
Three of the candidates are incumbents: Councilmembers Miah, Musa and Almasmari.
Hassan is a former councilmember, who opted to run for mayor a few years ago instead of seeking re-election.
He lost that challenge to Mayor Karen Majewski by a wide margin.
Hassan has been handing out postcard-sized flyers, in which he promises “A vote for me means no more city income tax.”
That has been a theme that is gaining more attention lately. Some argue that, by eliminating the city’s small income tax, it will spur economic development.
Residents currently pay a 1-percent income tax, while non-residents who work here pay a ½-percent. While the tax is relatively small, it generates $2.2 million a year.
That’s a considerable amount when you consider the city’s annual operating budget is about $16 million.
What’s not clear are the legal steps Hamtramck would have to take to dissolve the income tax requirement.
Hamtramck is one of 23 communities in the state that have an income tax. The other cities include: Albion, Battle Creek, Benton Harbor, Big Rapids, Detroit, Flint, Grand Rapids, Grayling, Highland Park, Hudson, Ionia, Jackson, Lansing, Lapeer, Muskegon, Muskegon Heights, Pontiac, Port Huron, Portland, Saginaw, Springfield and Walker.
Voters should be aware that the state’s election law has changed.
Now, voting by absentee ballot is much easier. Previously, only voters who were seniors, unable to get to the polls or going to be out of town could vote by absentee.
Voters no longer need to state a reason for voting absentee.
Also, if you are not a registered voter, you can register in person at the City Clerk’s office right up to election day itself and then cast your ballot.
July 12, 2019

2 Responses to Election season is quiet