EM comes up with labor contracts 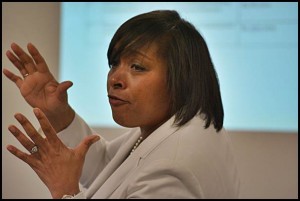 For two years at least, Hamtramck has peace among its labor unions.

All four city employee unions, which includes the police and fire departments and city hall employees, have signed new contracts.

There are two unions in the Police Department.

The biggest changes came in the fire and police departments. Emergency Manager Cathy Square said she came up with $2 million in savings from the two departments.

Contrary to what some thought would happen, the Fire Department remains staffed with all full-time employees.

It was thought that Square would reduce the number of full-timers and fill out the rest of the department with part-timers or combine the fire and police departments into a public safety unit.

Square said she wasn’t brought on board to make such a huge change.

“I didn’t come in to decide whether Hamtramck should have a Fire Department,” Square said. “I came here to get cuts.”

The Review will have more on the specifics of the contracts in next week’s issue.

But for now, the new contracts actually clears the way for the hiring of more firefighters and police officers.

One thing that opened up that door was the agreement to have the Police Department take over dispatch service for the Fire Department.

“Working together with the Hamtramck Police Department for the good of the residents of the City of Hamtramck has always been my goal. I am proud of our excellent response times. Housing 911 dispatch within the Police Department will allow for even more efficiency in providing our emergency services,” said Fire Chief Paul Wilk about the change in a press release.

Wilk said his department will have a total of 28 firefighters.

In the Police Department, there will eventually be a full-time staff of 32 officers and detectives and 9 to 11 part-timers.

In previous years there have been as many as 40 to 50 officers and detectives.

All of the contracts expire in 2016, which presumably at that time the city will be once again under local control with a full-time city manager in place.