Emergency Manager turns down council request for a meeting 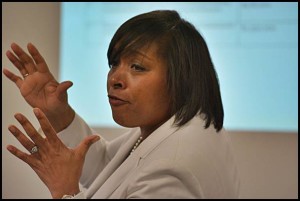 Emergency Manager Cathy Square is turning down a request to meet with the mayor and city council.

Hamtramck’s City Council wants some answers from the emergency manager and department heads.

Hamtramck has been under the control of a state-appointed emergency manager since July 1. Under the law, city officials are not permitted to make financial decisions.

Zwolak’s colleagues agreed and sent a request to Emergency Manager Cathy Square to allow department heads to give updates and also for Square to make a report.

Not going to happen, Square told The Review the day after the meeting.

“I have to follow Act 436,” Square said, referring to the law that governs the power and duties of an emergency manager. “I work for the state. I have a rulebook and procedure to follow. … I can’t violate the law that I operate under.”

Councilmembers further complained that financial decisions and labor contracts are being made without getting any background on what those decisions are based on.

They said that they need that information in order to be able to take over when Square leaves at the end of June. Until that time, Councilmember Anam Miah said, “We’re stuck.”

Square said the council won’t have to worry about making financial decisions after she leaves because they won’t be empowered to do so.

Instead, she said, she will have a two-year budget in place, and the state will have a transition board in place to oversee the financial decisions a city manager will be making.

Square said this should come as no surprise to the council because local officials are to blame for allowing Hamtramck to fall into a financial crisis for a second time in 10 years.

“They didn’t know what they were doing when they were running the city,” Square said.

As for meeting with the council just on a voluntarily basis, she dismissed that, too, saying in the past city officials have used that opportunity to “browbeat and micro-manage.”

“What are they looking for?” Square added. “What they fail to realize is that I’m on their side.”