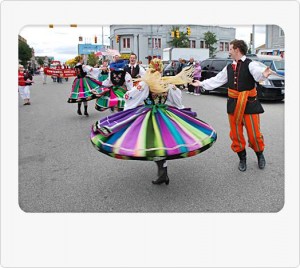 On Saturday it was a sweltering 98-freaking-degrees with something like 90 percent humidity. The sun actually hurt, and this reporter started feeling wobbly about an hour into it.

Thank goodness for bottled water, shade and a slight breeze.

The brave souls who showed up didn’t exactly have eating on their mind. The grills weren’t firing up that much. For some reason, they weren’t even quaffing down beers like they usually do.

Sunday, rain came down in mid-afternoon, but it seemed that festivalgoers waited out the storm under whatever shelter they could find.

By far, Sunday was the day.

And when Monday rolled around, well, so did fall. A cold snap put a chill on things as the day went on, and it even drove some vendors to shut down early. If there is any saving grace, it’s the fact that the same thing happened to Royal Oak’s Arts, Beats and Eats.

(Curse you, Oakland County, for stealing our weekend.)

But overall, everyone we talked to agreed it was still a good festival – all things considered.

Hey, when it comes to Mother Nature, you take your chances.

Not surprisingly, the downtick in attendance resulted in a drop in revenue for both vendors and the festival’s key sponsor – which in this case is the city’s Downtown Development Authority.

The DDA’s director, Darren Grow, said he was still tallying up the bills as of Wednesday, but figured the DDA was going to end up eating some of the costs.

Bittner said she figures the festival earned half of what it did last year – around $11,000.

Yet, she stressed, the word-of-mouth and public promotion of Hamtramck were worth the loss.

“I don’t know how many e-mails I got saying this was one of the best festivals,” Bittner said.

As for public safety, City Manager Bill Cooper, who is also Acting Police Chief, said there were no serious incidents. Maybe a few knuckleheads acting like, well, knuckleheads.

But nothing serious enough to report.

While there was plenty of talk of weather being a factor for the lower than expected attendance, there was one more factor, perhaps much more ominous, that no one really wanted to talk about.

Maybe because it’s been talked about so much it’s become fatiguing and too depressing to acknowledge: The economy … stupid.

The cruel fact is that many people are not only out of work, but also kicked off unemployment and now welfare. Add in the fact that there are simply no jobs out there, and it’s scary times, folks.

But that’s an entirely different subject. …

There was a rumor earlier in the week that President Obama was going to walk in Monday’s Polish Day Parade, but that rumor lasted about a second. Although Obama was in Detroit for the Labor Day Parade, he didn’t make a stop here in Hamtown.

Hamtramck would have been the perfect multi-ethnic, small-town backdrop for the president. Right now, the dude could use some major image boosting. You know, be seen with some real, down-to-earth folks. 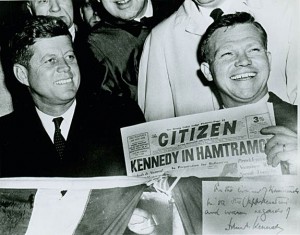 JFK visited Hamtramck. Where is Obama?

Why us? Because Hamtramck has been a traditionally Democratic stronghold (don’t ask us how Reagan and Bush figured into this), and where generations of immigrants have made their home in the pursuit of the proverbial American dream.

Note to Obama’s handlers: Seriously, WTF? Are you that tone deaf?

Maybe it was the weather.

(Want to see a whole bunch of photos of the festival? Check out our photo gallery at www.thehamtramckreview.com.)