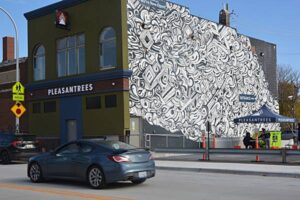 By Charles Sercombe
Hamtramck’s new marijuana ordinance goes into effect today, Friday, Feb. 12.
At Tuesday’s city council meeting, a majority of city councilmembers revamped their previous ordinance, which now allows those existing recreational marijuana outlets to continue to operate.
Mayor Karen Majewski called it a “compromise” from a previous ordinance that did not recognize the city’s two already-existing dispensaries.
What’s unclear is whether there are any more sales outlets in the works, and whether they can still go forward.
City Councilmember Ian Perrotta, who has favored allowing dispensaries, warned his fellow councilmembers that, by making the ordinance go into effect immediately upon publication, which is Feb. 12, there could be lawsuits from investors thinking they had until Feb. 26 to get their paperwork in order.
Normally, when the city publishes a new ordinance, that ordinance does not go into effect until 14 days after publication.
In a clumsy move at Tuesday’s council meeting, those supporting the ordinance forgot to amend it to change what date it goes into effect.
This oversight required Councilmembers Nayeem Choudhury, Fadel Al-Marsoumi, Mohammed Hassan and Mohammed Alsomiri to revisit the ordinance, change the date, and then re-approve it.
That move angered Mayor Majewski, who scolded them for not knowing what they were doing.
“I’m beyond pissed that we are re-considering this right now,” she said.
She added: “It’s evidence that you weren’t paying attention when you took the vote.”
Majewski also warned that a third marijuana sales outlet is on the verge of receiving permits and that pushing up the date this ordinance goes into effect could lead to a lawsuit.
Majewski initially supported the revised ordinance when it was first voted on just before it was reconsidered, but voted in opposition the second time around – apparently angry over how it was fumbled.
Perrotta voted in opposition both times.
The ordinance sets into place a number of restrictions and requirements to get yearly permits. This ordinance goes one step further than the state’s restrictions.
Hamtramck’s ordinance does not allow a dispensary to be within 1,000 feet of a place of worship.
On the surface, that appeared to affect Quality Roots on Caniff Ave., which is located near a newly-opened mosque at Caniff and Lumpkin.
But a city attorney, Harry Kalogerokos, pointed out that the sales outlet is exempt because it received its permits under state regulations, since the city did not have an ordinance in place at the time it opened.
While the councilmembers behind this latest ordinance agreed to allow the existing dispensaries, they have refused to allow them to sell medical marijuana – a proposal that Perrotta tried to get passed.
Perrotta argued that allowing the dispensaries to sell medical marijuana gives card holders a discount, and that the nature of their business is not altered.
Posted Feb. 12, 2021