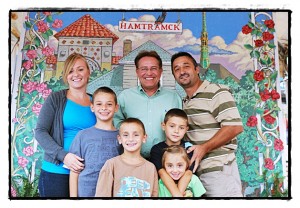 It’s been in effect for the past couple of years and so far it’s helped increase the number of new students enrolling into the district.

And if there was ever a family that has lived up to that motto, it’s the Djoka and Linda Dedvukaj family.

We met up with Djoka (or “Joe” as he prefers) and his wife, Linda, and their four kids at The Review’s photo booth during the Hamtramck Labor Day Festival. They were excited to have a family photo taken with the district’s superintendent, Tom Niczay who was working the school district’s booth nearby.

Dickinson East is where Tom Niczay had been principal. Niczay, who has always been popular with students, must have made a strong impression on Joe and Linda.

Flash forward to 1998 and Joe and Linda are married and starting a family. When it came time for their first-born to go to school, Linda thought about enrolling him in one of the charter schools here. It was just a passing thought.

But Joe is a traditional sort of guy and, together they both decided to have their son, Mark, “Follow our footsteps and be a part of the public school system.”

Not only did young Mark become part of the Dickinson alumni, he also was placed in Ms. Shipman’s class – just where his dad, Joe, started 30 years ago.

“When my son Mark had his first open house it was such a great feeling to go to Dickinson East after 30 years,” Joe said.

Sofia, the youngest of the family, has one more year to go before … you guessed it … starts her schooling at Dickinson.

Joe proudly boasts that unlike other Albanian-American families who used to live here and have since moved to Sterling Heights, he has decided to stay in Hamtramck.

“We are the only Dedvukaj family to “start here, stay here, succeed here,” Joe said.”It is such a great experience for our kids to go to the same grade school as my wife and I.”