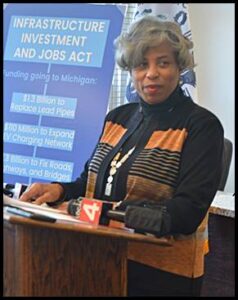 By Charles Sercombe
Hamtramck’s problem with lead water lines keeps getting more attention.
On Monday, Congresswoman Brenda Lawrence, who was joined by State Sen. Adam Hollier, held a press conference in Hamtramck City Hall announcing that Michigan is in line to receive $1.3 billion for communities to replace their lead lines.
Although Lawrence had nothing specifically to promise Hamtramck, the city appears to be on the radar screen of federal and state officials.
“Hope is on the way,” Lawrence said, adding: “No one should go to bed thinking, ‘Are my children going to be OK?’”
Elevated lead levels can affect the development of children, who are the most vulnerable to the effects of consuming lead-contaminated water.
Also coming to Michigan, among monies for other projects covered by the infrastructure bill President Biden signed into law, is $7.3 billion to repairs roads and bridges.
Once again, there’s also a need for road repairs in Hamtramck.
Lawrence noted that this infrastructure bill, along with the proposed Build Back Better bill now awaiting approval by the U.S. Senate, represents the largest investment in the country “since Roosevelt’s New Deal – think about that.”
Posted Nov. 26, 2021

One Response to Federal funding is coming for water lines