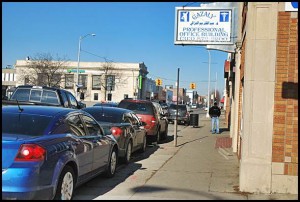 On Wednesday morning, local and federal agents raided a medical clinic and arrested a doctor for writing illegal prescriptions.

Police are being tight-lipped over a raid at a Jos. Campau medical clinic Wednesday morning.

Hamtramck police were assisted by the DEA and state police in the raid of the Qandil Family Medical & Urgent Care Center, in the 9000 block of Jos. Campau.

The clinic had long been rumored to be issuing illegal prescriptions. On almost any day, a long line of people could be seen waiting to get into the clinic, which raised suspicion over what was going on inside.

Mayor Karen Majewski, on her Facebook page, said she was pleased the office was shut down.

Hamtramck Police Chief Max Garbarino said he could not release any details of the investigations, but he did confirm there were multiple arrests.

The News also said that Dr. Qandil wrote 140 prescriptions a day – the second highest number of prescriptions written in the state.

Several months ago police were called to the clinic because patients began fighting. It was at that time that the public became aware of the daily activity at the clinic.