Festival fundraiser is another successful fun night out 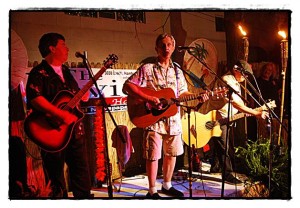 Well, the smoke has cleared.

The last strains of the music have drifted from our brains. The aftermath of the food overload may not be fully realized for a few days.

But the money raised, ah, well – that’s the most lasting legacy.

City luminaries such as the mayor, current city councilpersons (as well as a current or former candidate or two), city officials and business leaders rubbed elbows, supped, and were entertained by a variety of acts, notably a trio of Dave, Kenny and Al from the Polish Muslims and a Frank Sinatra impersonator.

On an evening where an earlier storm had soaked everything fairly thoroughly, the threat of an encore had people sneaking glances at the western skies. But aside from a negligible sprinkle or two, the rest of the evening proved downpour- (if not humidity-) free.

Festival organizer Kathleen Bittner served as a lovely hostess for the early part of the night, and her cohort (and a new mom!) Rachel Srodek put in an appearance later on.

Review Publisher John Ulaj himself played host to more than 150 people with a Polynesian, tiki-themed evening. The rear courtyard was dominated by a large tiki bar, and whereas last year the bar itself had to be rented, this time there was a specially constructed one, courtesy of newly retired Hamtramck Police Sgt. Wally Tripp – who doubled as primary DJ for most of the event.

Food, provided by both Royal Kabob (the chicken, lamb, rice, hummus, salad and bread) and Srodek’s Market (about 300 pierogis, cooked at the P.L.A.V. Post 10) was in constant supply. Beer, wine and stronger spirits flowed liberally from the open bar. The constant stream of entertainment, along with the indoor-outdoor set-up, seemed to inspire people to mingle freely, and so mingle they did.

In the end, the skies obliged by holding back the rain as best they could, and so the party went on into the wee hours. The crowd eventually drifted off into the night, little by little, over the last hours.

It didn’t even look so bad the next morning. Well done, Hamtramck! And now – on to another outstanding Labor Day Festival.

Here’s hoping the extra shot of funds will help keep it going smoothly — as smooth as this party went!

2 Responses to Festival fundraiser is another successful fun night out