Festival will focus on being local 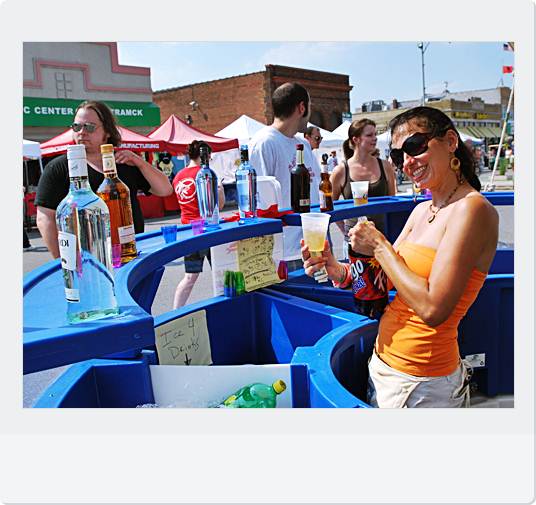 The Hamtramck Labor Day Festival will be more compact this year, but it is indeed going to take place.

Well, it looks like another Labor Day Festival is coming, Hamtramck, and this time by the skin of its teeth – and the good will of a group of energetic younger folks with a lot of community spirit.

Spearheaded by Konrad Maziarz (MAY-zee-arz), 28, of the Hamtramck Public Library, and Shannon Lowell of Café 1923, the festival now gets to stick around to see a 33rd year.

Maziarz wanted to make sure to divvy the credit up between some of the other prime movers in this year’s edition: Entertainment Directors Benjamin Hernandez and Jan Carroll; Darren Grow of the DDA; Tony Raucho, who’s coordinating the vendors; Anna Dinn; Emily Kiser; Ana Cukovic; and Jason Friedmann, head of the city’s Economic Development.
“I wish I could list everyone from the community who is supporting us to make this happen, but I don’t think there’s enough space for that,” Maziarz added.

The torch passed over to the pair from previous organizers Kathleen Bittner and Rachel Srodek, who themselves did much to revive the spirit of what may, to some, have grown a bit stale before that. Maziarz had helped on those recent years’ committees with the women, and offered to take the reins after they moved on.

Lowell was a good friend of Maziarz’s, who used tohelp run the fabled Dally in the Alley over on Wayne State’s campus. But again, Maziarz wanted to deflect the credit to “the entire committee” – and community.

Working with a taut budget of $86,000 for the three-day affair (Friday nights have been phased out for the past several years, due to the extra pay for police time not being offset by the little bit of revenue taken in that night), and with previous years’ sponsorships drying up this time around (partly, no doubt, due to the false rumor that the festival was going to go belly up this time), the focus this year will be on the “local.”
As in, local music, food, drink – and people.

Contrary to another common rumor, there will still be two stages, as before. They will, Maziarz said, be a bit closer to each other than in the past. Indeed the whole festival will be scrunched in a bit more, physically, with the north border now essentially becoming Commor rather than Carpenter (actually, according to Maziarz, the carnival will still extend a bit past Commor, but the festival proper – meaning the booths and stages – will be more confined).

The festival can continue, in part, because of some creative budgeting. Money was saved on the stages themselves, the lights, sound, as well as the acts, which are coming much more from the ranks of the local than the last couple years.
Among the acts appearing this year will be The Sights, The Detroit Cobras, The Octopus, Melvin Davis and the United Sound, The Polish Muslims, Dennis Coffey, the Kielbasa Kings, the Misty Blues and more.

Also, the Polish Day Parade, the popular canoe races and the kielbasa eating contest will remain. A full schedule for the Sept. 1-3 festival will be published soon in a separate guide in this publication. (For advertising opportunities, call The Review office at 313-874-2100).

Masiarz wanted to stress that they are working on a multi-year plan (with more permanent committees) in order to have better continuity from year to year, and to be able to then explore some other fundraising opportunities. They are even looking into creating a 501(c)3 Corporation, which could lead to some real momentum for the coming years.
What’s that in the air? Fall?

Nah – just kielbasa grease and beer burps. Just the way we like it.

2 Responses to Festival will focus on being local