Update: (Dec. 29, 6 p.m.) Since our last update four hours ago, the Hamtramck Police Department has issued this press release: 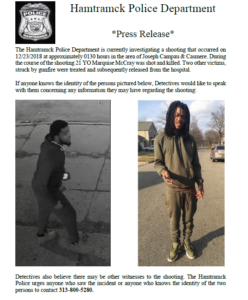 Update: (Dec. 29, noon) — WDIV Channel 4 news is reporting the identity of the victim of a shooting death a week ago (Dec. 23) outside of MyHookah Lounge. According to the Dec. 28 news report, 21-year-old Marquise McCray died in the shooting.
His family held a vigil on Dec. 28. McCray was described as a good-natured person who was a cancer survivor. The report did not say where McCray lived.
His family said they think the 2 a.m. shooting was the result of an armed robbery gone wrong.
Hamtramck police are not releasing any details of the shoot, which left two others injured. Police won’t release the identities of the victims, their ages nor their gender.
Police also won’t discuss a possible motive for the shooting, nor release a description of the suspect, including gender.

By Charles Sercombe
Hamtramck’s first homicide of the year happened early Sunday morning.
According to sources, at about 2 a.m., outside of MyHookah Lounge (11435 Jos. Campau), a lone gunman shot three people.
One of the victims died and two are being treated for injuries.
Police declined to release further details, including the identities of the victims, because the case is still being investigated. Police Chief Anne Moise told The Review that the suspect has not been apprehended. She said no other information about the suspect can be released at this point.
Michigan State Police are also helping out.
Anyone with information is asked to call the Hamtramck Police Department at (313) 800-5280.
According to online reviews of the lounge, customers rave about the owner and atmosphere.
“Best hookah in Detroit! We came all the way from Toronto and the owner couldn’t be nicer. We were treated to some amazing flavors and a great time,” said Pyal Hossain.
The last homicide in Hamtramck was in 2015 when a man was found shot to death in his home on Prescott.

One Response to Few details being released in shooting death