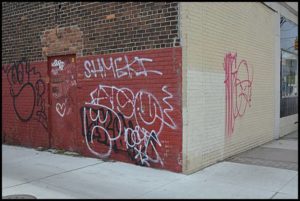 Fighting graffiti, like littering, is an almost impossible task.
How often does one actually see anyone spray painting graffiti? Littering, though, is something we all witness here and there.
But for police officers, catching folks in either act is a rarity.
It’s not unusual for readers to urge us to write something about littering to get people to stop it. The terrible truth is, chances are those folks don’t care if they are scolded.
If you are like us, we pick up litter in front of our residences, as well as whenever we can while out in public – as long as there is a nearby trash can.
Graffiti is a different thing.
And it is something that, like a rash breaking out, is spreading in town. We wrote about this a few weeks ago.
Fighting this blight requires all of us to keep a sharp eye out. Unfortunately, it’s a good bet that much of it happens late at night when most of us are asleep, or just not out and about.
One effective way to fight it is for property owners to quickly remove graffiti. Yes, we know, they are the victims, and there is both a cost and a time-consuming effort to remove it.
It’s unfair, but it is also the price and responsibility of owning property.
If you are a property owner and haven’t heard this before, it’s worth repeating: By removing graffiti, you actually go a long way to discouraging more graffiti.
Again, like a body rash, a little graffiti can grow in no time to an ugly blight in an area.
By not taking care of the problem immediately, it tells the low-lifes doing this that we don’t care, and to go ahead and do even more public scrawling.
Writing about an issue like this is much like shouting into the wind. Can anyone hear us? And if they can, how many actually care?
Preventing blight takes community action, and a sense that we are indeed a community that cares.
Posted May 22, 2020