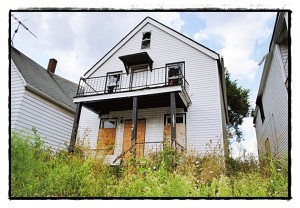 Blight busting seems to be on the mind of many in town – including city officials.

A growing number of residents are complaining about the never-ending amount of trash on the streets as well as graffiti and overgrown and weedy yards.

A new kind of blight has swamped Hamtramck in recent years: the increase of empty houses from foreclosures. That has led to grass becoming overgrown – in some cases a couple of feet high – and weeds shooting out everywhere.

City officials say there are 400 empty houses in the city, but the city has limited funds to hire people to enforce housing codes or cut the lawns. In fact, the city recently had to lay off one code enforcement officer because of a budget deficit.

But there is one source of money the city can tap into. The federally-funded Community Development Building Grant (often abbreviated by government officials to the tongue-tying acronym, CDBG Fund) is a yearly program that funnels about $400,000 into the city for various projects.

Cities can use the money for a wide variety of projects and programs, from purchasing a fire truck or assisting in development to blight control.

Councilmember Cathie Gordon led the charge in reshaping this year’s expenditures. She wanted to de-emphasize the original proposal to focus on business retainment and façade improvements to fighting blight.

After a special work session by the council, Gordon convinced her colleagues to shift half of that budget to a new program aimed at housing code enforcement and attacking litter and overgrown yards.

Her top wish was actually to use $90,000 of the fund to go toward buying a new ladder truck for the Fire Department. The city’s current ladder truck is over 30 years old and is at the end of its service.

But the council was warned by the city manager that the total cost of a truck is upwards of $1 million and earmarking $90,000 now doesn’t mean the city can immediately order a new truck.

The council will have to hold a hearing on creating a new blight program that has tentatively been budgeted with $70,000. If the program is eventually adopted by the council, it will start to target specific areas of the city to clean up.