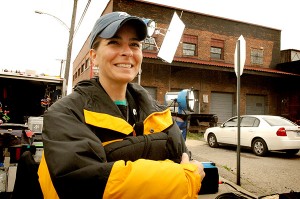 A few weeks ago in Model D, we ran a powerful essay by Dave Krieger, who was the Detroit-based webzine’s original photographer and now works as a location scout and manager for film industry crews working in Michigan.

His appeal to keep film incentives alive has gone viral across the state. The incentives have been slashed in the governor’s proposed budget. What remains has already had a ripple effect in the film industry, which has pulled large projects (the “Batman” franchise) from 2012 shooting schedules.

Krieger makes a convincing argument that those that will be most adversely affected are the creative people and technicians in the state that were employed by this industry, and communities — like Hamtramck — which struck up good relationships with film people over the last three years. More people working, of course, means more money in circulation in places where the work is being done.

“The film industry is driven by two elements, money and location. Many states have a film program in place, Michigan’s was the most generous and when enacted put a buzz into Hollywood. Michigan’s topography has lakes the size of oceans, dunes, farms, hills, rural and suburban, and of course an incredibly visual number of cities. At this time, Michigan was bleeding workers, talent and tax revenue.

“Over the past few years the state has seen an industry grow, hire, and succeed faster then any other in our state’s history. The numbers speak for themselves. An Ernst and Young report, which independently tracked the money invested from film production, determined that for every dollar Michigan invests, six dollars are spent. Repeat that: For every dollar invested, it comes back sixfold!

“Under Gov. Granholm and in the pages of Model D, there has been an ongoing discussion of the creative class. How does Michigan retain them, train them and help them expand their dreams? This industry is all about creative class. Every one of the people employed in a production plays an active role in developing the final result. These people I work with are young, primarily; energized and excited about their opportunities in developing a new industry in this state.

“This program is a game changer for Michigan. It has transformed overnight, opportunities for college graduates and young people who were fleeing in droves because of the lack of jobs, opportunities and creative work. No other industry can point to this instantaneous success.

“Putting a cap on the rebates and not signing the contracts for movies currently looking to Michigan has crippled the program. Without leadership, the industry will turn away and may not come back. Producers are looking to Michigan to sort this out NOW. The rebates may need to be retooled and there is time for that. The governor has force fed this without looking at the long-term consequences.

“Unfortunately, this could be the immediate result:

• Millions of dollars in investment: wasted.

• A new industry in Michigan: banished.

“We need to alert our elected state representatives, senators and the governor. Tell them you support the new film industry. It is not too late to motivate these leaders to action.

“With your help, we can keep something that clearly benefits creative life — and job growth — in Michigan going forward.”