Finally, a southend eyesore will now come down 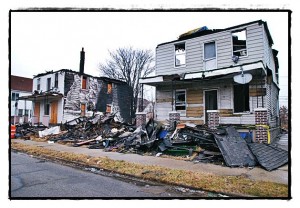 The remains of three houses on Faber St. that were destroyed in a fire will finally, after a year, be demolished and removed. The catch is for city officials to come up with $15,000.

It’s been a year since three houses on the end of Faber St. burned.

The cause of the fire is not known, but the damage that took place is still there for the world to see.

And that has City Councilmember Robert Zwolak concerned, because the two houses that remain standing (the middle house is just a mound of rubble) pose a threat to the safety of those who live nearby and also to kids who might wander into the houses to play.

The problem, however, is where to get money to tear them down. Only one house was insured, said City Manager Bill Cooper. Insurance money for that house should cover most of the demo and clean-up costs.

The other two houses would have to be torn down at the city’s expense, with the hope of recouping that expense when the lots are sold.

Ah, but getting that money back is a long shot, Cooper said, because the lots are not worth the cost of the demo.

There might be one more avenue. Jason Friedmann, the city’s Director of Community & Economic Development, said he is looking to tap into federal funds administered by the county.

Zwolak said the city can’t afford to wait, and said the demo work should be done and paid through whatever source the city can find.

The city council apparently had heard enough, and unanimously approved the job.

That’s good news to Berna Al-Murisi, who lives next-door to the mess.

“I’m waiting for another fire,” she said. “Either that, or some child getting injured in there.”

4 Responses to Finally, a southend eyesore will now come down