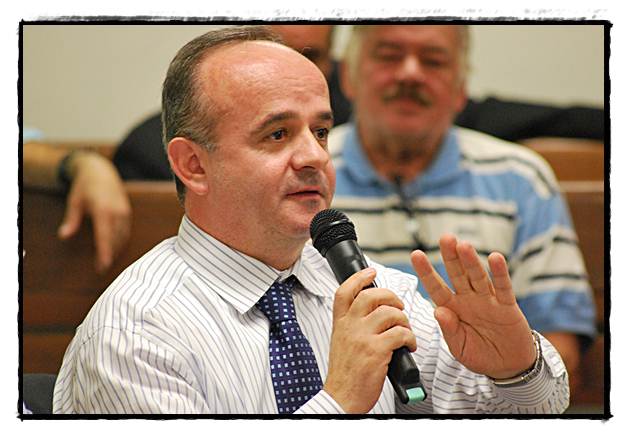 The exodus in city hall continues.

First there was Acting City Manager Erik Tungate who resigned — OK, maybe he was forced out by some on city council — then most recently City Clerk Ed Norris announced he is leaving.

Tungate wound up as Oak Park’s new city manager, and Norris is also heading to that city to become its new city clerk.

Now also leaving is Finance Director Nevrus Nazarko, who is Hamtramck’s first Albanian-American city official. He has been with the city for 14 years.

He was also briefly Hamtramck’s acting city manager until he came under attack from some on city council. He resigned from that temporary post, saying, officially, that holding the two jobs of finance director and acting city manager was too much to handle.

In his official resignation letter to the city council, he says he is leaving “to pursue other opportunities.”
No, he said, he is not heading off to a post in Oak Park.

There has been some rumbling in city hall that certain councilmembers wanted to tinker in the Treasury Department, and Nazarko wanted nothing to do with their plans.

The city is currently going through one of its worst financial crises since being placed under the control of a state-appointed emergency financial manager.

Nazarko is leaving the city with what city councilmembers have agreed is a good budget plan to ride out the next three years, when, hopefully things will take a turn for the better.

But, even after three years, the city will face a budget deficit.

Nazarko touched on that in his resignation letter.

“While I realize that there are some tough times ahead for the city, in financial terms, there is nothing that this hard-working, blue-collar town can’t overcome,” he said.

“At the end of the day, the Hamtramck that I know will emerge stronger, leaner and ready to write yet another chapter in its rich history. …”

Nazarko will remain on the job until Oct. 15.

Councilmember Robert Zwolak said that Nazarko has been critical in “saving the city” a number of times when in a financial crisis.

“Trying to find someone to fill those big shoes will be tough,” he said.