Fire department is all fired up for centennial celebration 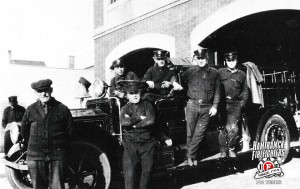 Hamtramck’s Fire Department is celebrating its 100th anniversary this year with a dinner next Saturday, Sept. 27, at P.N.A. hall.

By Mike Murphy
Special to The Review
It’s beyond the rumor stage that firefighters know how to throw a bash, so don’t be shocked if the entire city feels the party heat rise on Saturday, Sept. 27 when the Hamtramck Fire Department celebrates its 100th Anniversary at the P.N.A. Hall.
“It’s going to be a very exciting night for us,” John Dropchuk said. “We consider ourselves a good part of a great community, and we’re going to have a great time.”
The lead organizer for the event and 15-year veteran Hamtramck firefighter and motor engineer said the current crew of firefighters is expecting to shake hands with many former Hamtramck firefighters at the gala event, which kicks off at 5 p.m. with a dinner catered by Polish Village.
“Obviously someone who was there in 1914 is not going to be there,” Dropchuk said. “But we have heard from a lot of retirees.”
Among them, Dropchuk said, is retired 30-year veteran firefighter Lt. Mike Kostiuk, who not fought fires in Hamtramck, but is also known for being the “oldest living Lion.”
The former Detroit Lions’ offensive and defensive tackle, who is now 94 years old, will be on hand along with a slew of other retirees. The “100 years in the making” event is all about Hamtramck and designed to be good fun for the whole community.
The $50 ticket for the event includes dinner, an open bar, and entertainment. Following dinner, guests will be treated to a brief presentation about the department and live music provided by Jotown and The Polish Muslims, who hit the stage at 8 p.m.
Muslims leader David Uchalik said the band is especially looking forward to the centennial show.
“We’re fired up for the performance and expect it to be one of our hottest shows of the year,” said Uchalik, who is always good for a pun or two. “It is an honor to play such a special event for a group like the Hamtramck Firefighters, who have been so important to the safety and well being of Hamtramck for so many years, almost as long as our band has been together.”
There will be loads of pictures and memorabilia on hand to help celebrate the fire department’s centennial.  The fire department will also be selling a 100th Anniversary Commemorative Book at the event.
While the fire department’s actual start-up date was November 16, 1914, Dropchuk said the department decided on a September gala so some firefighters would not miss the celebration.
“We’re having it a little early to accommodate the hunters,” Dropchuk said.
Actually, the fire department has been celebrating its centennial in different ways throughout the year.
On July 15, Sen. Carl Levin read a letter commemorating the department into the Congressional Record recognizing the service and commitment of the Hamtramck Fire Fighters since 1914.
Dropchuk said the celebration is still in the making and some other surprises may be in store. Advance ticket information can be found at: http://www.hamtramckfirefighters.com