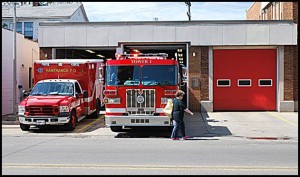 Firefighters will be busier than usual now that the department has agreed to a new mutual aid agreement with Highland Park and Detroit.

By Charles Sercombe
Hamtramck firefighters are going to be busier.
The Hamtramck Fire Department has come up with a new mutual aid support program with Highland Park and Detroit.
The new plan calls for Hamtramck to respond to any fire call within one mile of the city. Fire Chief Paul Wilk said that he will send three or four firefighters to assist and another department will send an equal amount to the city with a fire call.
The goal is that instead of just six firefighters showing up, about 15 will be on hand with two additional fire trucks.
“This has been a year in the making,” Wilk said.
Wilk said that when there is a call for help there will always be three or four firefighters left behind in Hamtramck to respond to local calls.
He stressed that there will be no additional cost to the city.
The three departments have been training together to get familiar with equipment.
“We’re getting to know the guys,” he said.
Wilk said the expanded mutual aid also is in line with Gov. Snyder’s call for more mutual assistance among communities to cut down on overall costs.
“We’re trying to get what the state wants – regional cooperation – but keep our identification,” Wilk said.
He said there is also a chance to win a grant to purchase an additional fire truck.
“All in all it’s going to be a lot safer for everyone,” Wilk added.