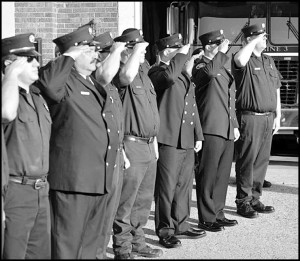 Hamtramck firefighters have agreed to an adjustment in their employment contract with the city that will reduce the minimum staffing level from 18 to 14. In exchange, the city will give them a 3 percent salary increase.

By Charles Sercombe
The city has taken a step toward funding the Fire Department when a federal grant runs out this coming January.
The city and the firefighters’ union agreed at Tuesday’s city council meeting to reduce the minimum staffing level of firefighters from 18 to 14. That number does not include ranking officers or the fire chief.
In exchange, firefighters will each receive a 3 percent pay raise.
The deal will save the city about $114,000 a year in salaries and an additional $50,000 in benefits. Prior to the deal, yearly salaries for firefighters totaled $1.8 million. It will now be $1.7 million.
The city will also get a further reduction in overtime costs, which for the 2017-18 fiscal year totaled over $124,000.
Several weeks ago firefighters argued that they need a full staffing level of 18 firefighters.
“To be frank with you, I’m really not thrilled,” said Andrew Oleksiak, the president of the Hamtramck firefighters’ union, at Tuesday’s council meeting. “But I understand the financial impact to the city.”
Also initially opposed to reducing the staffing level was Fire Chief Danny Hagen, who said several weeks ago that he could not guarantee adequate service with fewer on staff.
He did not comment at Tuesday’s council meeting, nor was he asked to.
That was when the council passed a city budget for this fiscal year with the staffing reduction. City Councilmembers Ian Perrotta and Andrea Karpinski voted against the budget reduction.
Both voted in favor of the staffing reduction as agreed on with the firefighters’ union.
Perrotta said the pay increase has the potential to retain newer firefighters, who in return can provide better service to the community through their experience.
There was an objection raised by resident Carrie Beth Lasley, who attends council meeting regularly, who said the staffing reduction will lead to a raise in home insurance rates.
“Please stand up for public safety,” Lasley told the city council.
Oleksiak said that is not true. He said with a mutual aid agreement with Detroit and Highland Park, who assist in all fires here, the number of firefighters responding will be taken into consideration by insurance companies.
He said that with the mutual aid assistance, the city’s insurance rating will get better — not worse.
The city has enjoyed a break on paying firefighter salaries for the past few years through a federal grant program called Staffing for Adequate Fire and Emergency Response (SAFER).
That grant will run out in January of 2019, which is the halfway point in the city’s fiscal year.
For the past two years the grant covered the salary costs of 14 firefighters, which totaled $2.3 million.
The department’s total budget is $3.3 million for this year.
At this point it is unclear if the city can continue receiving the grant. But even if it does, the grant program’s funding formula has changed, said Fire Chief Hagen.
He said going forward the grant pays for only 75 percent of the salary cost. The city would have to come up with the remainder.
Department-wise, firefighters and police officers are among the top earners in the city.
Out of the firefighter staff of 2017, seven were paid in the $90,000-a-year range. Another four were paid over $80,000, seven were in the $70,000 range, two were paid over $60,000, five earned over $50,000 and two were paid over $30,000, while one was new on staff and worked only part of the year brought in over $11,000.
The highest-paid firefighter earns a little over $99,000 a year.
That information came from 2017 W-2 tax statements through a Freedom of Information Act request submitted by The Review.