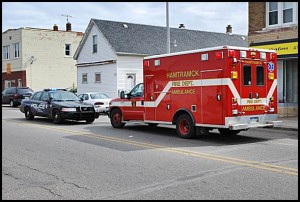 It’s nine months into the city’s budget year – which started July 1 – and for some firefighters and police officers, it will be a very good year.

There are still three months to go in the fiscal year.

On top of that, their benefits are also generous. Firefighters get $1,500 a year for clothing, and thousands for their birthday, holiday pay, unused time off, unused sick days and filling in on ambulance duty.

Police officers were no slouches either in racking up thousands of dollars in overtime and various perks.

One officer earned over $21,000 in overtime pursuing narcotics investigations. (This overtime is not paid through the city’s general fund, but instead from a special Drug Forfeiture Fund.)

The above figures don’t include the cost for health insurance or pension contributions that the city is required to pay.

While some overtime costs are offset by special funds, including the volunteer overtime patrol, the addition of overtime pay is included in the yearly salary and later used to calculate how much police officers and firefighters will earn in retirement.

Those who are much further down on the earnings list are City Hall employees – the clerks and laborers. They earn about $30,000 a year and take in nominal overtime earnings, if any at all.

That’s still better than what the average Hamtramck resident earns. According to the 2010 Census, the average salary is a little over $24,000 a year.

The cost of supporting city employees has contributed to the city’s deficit spending, and in a few weeks could lead to payless paydays.

City Councilmember Robert Zwolak, who years ago took a nominal buyout from the city after serving as city clerk for a number of years, blamed the city’s financial woes on the generous wages and perks past city officials have signed off on.

He also lashed out at department heads for not “monitoring overtime on a daily basis.”

He said that since police and fire chiefs work their way up through the ranks, “It’s a good old boys’ club.”

At this point, the city is getting a financial review from state officials. It’s expected that the state will appoint an emergency manager to take control of city finances.

It’s also expected that the state will disband the Fire Department and have another agency take over that service.

Zwolak has this advice to the younger members of the Fire Department.

“Find a job in the suburbs where you live,” he said. “You’ll still have an opportunity to maintain a career.”