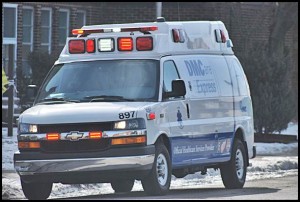 Hamtramck firefighters are firing back at city officials over who should provide ambulance service.

Acting City Manager Kyle Tertzag recently took the department’s two ambulances out of service to find out what repairs are needed to the aging vehicles. In the meantime, he has contracted Detroit Medical Center to provide ambulance service.

Tertzag took that action when it was reported that one of the department’s ambulances would not start after picking up a boy who had stopped breathing. Ambulance personnel were forced to turn to a neighbor of the boy to take him to a hospital.

Firefighters want the ambulances back in business.

“For the fastest, most efficient EMS service possible, it is crucial that our public officials put our ambulances back in service. Hamtramck residents deserve no less, and to keep this city’s ambulances out of service does not represent a commitment to public safety,” Hamtramck Firefighters Association President Matt Wyszczelski said in a press release.

Firefighters admit, however, that the two ambulances both have over 100,000 miles on them and have had “multiple mechanical problems.”

Still, firefighters insist the city should put the ambulances back in service as soon as possible.

“Some things shouldn’t be outsourced,” Wyszczelski said. “There is no doubt that public safety will be compromised by longer response times and unavailable ambulances if the city opts to outsource EMS service to a private company. The Hamtramck Fire Department is best equipped to provide EMS service in Hamtramck.”

Out of the department’s approximately 3,000 runs per year, Fire Chief Paul Wilk said 80 percent of them are for ambulance service.

Tertzag said that despite claims by the firefighters that DMC won’t respond in a timely fashion, an ambulance is stationed in Hamtramck – at Holbrook and Conant – at all times.

“This is just another phony scare tactic that the union unfortunately has resorted to,” Tertzag.

As for the quality of service, Tertzag said the community will actually receive improved care because DMC provides crews with advanced training.

“We’re getting an upgrade,” Tertzag said.

What’s at the heart of the issue is a demand from the city for the union to agree to deep contract concessions.

Tertzag said he needs the union to agree to $1.2 million worth of concessions. Firefighters do not contribute any money to their health insurance nor are they required to pay deductibles for office visits or prescriptions.

Firefighters have presented concessions worth $500,000. Tertzag said he is still verifying that amount.

Tertzag said he is under instruction from state Treasurer Andy Dillon to get concessions from the firefighters before the state will approve the city’s budget deficit elimination plan and a request for an emergency $3 million loan.

The city is facing a $3 million budget deficit, and so far has skipped paying into the city’s pension fund to avoid payless paydays. The city owes $1.2 million to the pension fund.

One Response to Firefighters demand return of ambulances