Firefighters get a workout last week 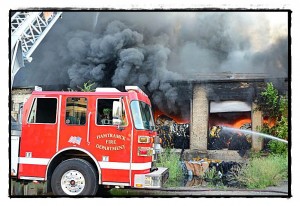 Hamtramck Firefighters had a busier than average week, highlighted by a long-burning Highland Park fire at the old Sanders confectionary that they assisted on over the weekend.

That blaze began around 5 a.m. this past Saturday morning, the 14th, in the historic building on Rhode Island St. It was fueled, at least in part, by the many wooden pallets and the rolls of old foam and carpeting being stored there, Fire Chief Paul Wilk said.

He mentioned a Forest Island Recycling Truck trailer truck that was noticed parked outside, but said he couldn’t be sure whether that company was actually occupying part, or any, of the facility anymore, if they ever had.

“We sent our new aerial truck over, to help (Highland Park) out,” Wilk said. Detroit Firefighters also came in to assist, but Wilk said that the building, being so large and so well constructed, presented unusual difficulties.

“It seemed like we just kept pushing the fire around in there. We weren’t even always sure where it was burning,” he stated. “The building was built so long ago, and it was all concrete. Nowadays it would be steel. And it’s big – about 500 feet by 500 feet. It kept collapsing, so we couldn’t go in.

“And then, there were water issues. Just not enough water.”

Wilk said that, by the time the fire had come under control and/or burned itself downmany hours later, the building had become a loss. The roof had completely collapsed, as well as some of the walls.

The week held an unusual occurrence for firefighters here a couple days later, as well. They were called to the same address – a party store on Carpenter, on the city’s north end – two consecutive nights, on Monday and then again Tuesday.

Asked if that seemed, well, a tad strange, Wilk agreed.

“We’ve filed a police report, and we’re waiting for some lab results from the Michigan State Police,” he said. “It’s suspicious, to say the least.”

It wasn’t all work for the crew, though. Wilk and Police Chief Max Garbarino had their respective crews over to Zussman Park last Saturday, from 10 a.m. until 1 p.m., as part of a day organized by the group Welcoming Michigan (www.welcomingmichigan.org). One of the highlights of that event was a tug-of war between the cops and the firemen, won this time by the men in blue.

Not fair, after fighting that big fire all day? We didn’t say it!