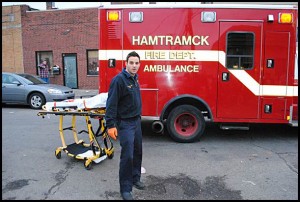 Hamtramck firefighters are demanding ambulance service be returned to the Fire Department.

In a grievance filed by the firefighters’ union, they are demanding that despite the department’s ambulances not being in running order, they should still be the first to respond to medical emergencies.

In the grievance, which The Review acquired through a Freedom of Information Act request, the union says that a fire truck should be reserved for EMT crews who would arrive at a medical run first and then assess whether an ambulance should be called.

In that way, each EMT crew member would receive their contract-mandated extra pay.

Several weeks ago the city contracted with Detroit Medical Center to take over ambulance duty when it was determined that the Fire Department’s two ambulances were too unreliable to continue in service.

“The firefighters are asking for a three-to-four minute delay on every ambulance run so they can get $100 extra per shift,” Tertzag said. “It’s pretty clear to me that they are not looking out for the best interests of the residents.”

The ambulance service is currently being provided by DMC for free to the city, although patients are being charged. (The Fire Department also charges patients for the service.)

“The city has taken away a core duty without bargaining,” said union President Matthew Wyszczelski. “It’s a contractual right.”

Wyszczelski told The Review he could not further discuss the matter because the grievance is pending.

A “Settlement Desired” included in a labor grievance filed by the Hamtramck firefighters’ union demands EMT crews still be the first responders to medical emergencies despite the department’s two ambulances being out of service.

One of the department’s ambulances failed to start back up after responding to a house where a boy was not breathing. The ambulance was stranded and a neighbor of the boy agreed to drive him to a hospital.

Acting City Manager Tertzag said that after hearing about the incident and conferring with the fire chief, he had no other choice but to take the two ambulances out of service.

“That’s when we said, ‘What’s going on here?’” Tertzag said.

As for returning the two ambulances to active duty, Tertzag said he is waiting for repair estimates to come in.

The firefighters’ grievance also took the city to task for inquiring with Highland Park officials about taking over fire service for Hamtramck. Firefighters say they also have sole right to provide that service.

The city has been struggling financially for over a year, and state officials are contemplating whether to send in an emergency manager.

It’s projected that the city will face a $3.5 million budget deficit by June or July. One of the places city officials have looked for savings is in the Fire Department’s $5 million budget.

City officials have asked for deep contract concessions from firefighters but so far the two sides are far apart.

The average wage earned by a firefighter is $80,000 per year when all their perks and overtime are factored in. Since firefighters work in combinations of 24-hour shifts — which is bound by union contract — they end up working only nine days out of the month.

And because of contract-mandated minimum staffing requirements, firefighters are easily able to pick up overtime work. Some firefighters have already earned upwards of $8,000 in overtime this budget year, according to city payroll records.

There are still three months to go before the budget year ends on June 30.