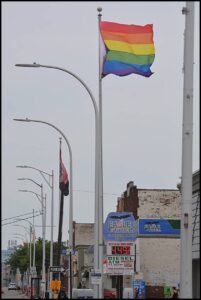 A controversy has erupted over a pride flag being flown on a Jos. Campau flagpole.

The display of the pride flag is once again an issue in Hamtramck.
Recently, it came to light that a pride flag is being flown on a city-owned flagpole on Jos. Campau near Carpenter.
Russ Gordon, chairman of the city’s Human Relations Commission, said he was asked to fly the flag by Timothy Price, who is chairman of the city’s Arts & Cultural Commission.
Gordon has been volunteering to raise money for the 18 flagpoles on Jos. Campau for a number of years and has been the one who raises and lowers the flags each year.
Price said to those opposed to the display: “We have to separate church and state. Hamtramck is a place for all.”
He also reminded elected officials: “They represent all the people.”
This development took some city officials by surprise.

On the city’s Facebook page, this notice was posted:
“The City of Hamtramck is aware that there has been much concern over the status of the Pride Flag flown on Jos Campau in our City. These flag poles and flags are maintained exclusively by the Hamtramck Human Relations Commission whom is a commission of the City, but has authorization to act on this matter independently.
“The City of Hamtramck’s elected officials and administration were not made aware prior of this specific installation. With that said, we understand that there are very strong views both for an against this flag from our residents.
“We strive to maintain a peaceful welcoming community for all of our residents and visitors here in Hamtramck. The flag will remain in place until further notice. City officials intend to meet at a later time to discuss the ongoing plan for display of this flag.”

According to sources, Mayor Ameer Ghalib, the city’s first Yemeni-American to hold this office, ordered the flag to be removed. The Review reached out to the mayor for comment and he gave a lengthy response:
“The mayor didn’t and will not do anything about it. It’s not my issue, it’s a divisive community issue made by the person who solely decided to rise it in Jos. Campau for the first time from a commission that its main mission is supposed to be bringing people together.”
You can read his full response at the end of this article.

The pride flag issue first came up last year when a divided city council debated whether to allow it to be flown on the city-owned flag pole in Zussman Park.
Former Mayor Karen Majewski had to break a tie vote to allow it. Some have speculated that was a one reason for her defeat when she sought re-election las year.
The outcry against the flag has come mostly from Muslim community leaders.
On various Hamtramck Facebook pages, the comments are flying.
Nasr Hussain, a supporter of Ghalib, said on one Hamtramck Facebook page that “The city should not be in the business of selectively flying social groups/political opinions flags on city property. …
“Doing so will open the door for legal liabilities by different groups that want their flags displayed. You are free to display whichever flag on your home or business but the city should remain neutral to all groups and opinions and stick to working on improving the lives of Hamtramck residents and not inciting controversy.”

On the city’s Facebook page, Sharon Buttry wrote:
“What we tolerate is what we become. If we tolerate division, fear and hate, that is what we will be as a community. If we insist on diversity, inclusion and respectfully listening to everyone, we will be an amazing place of welcome and peace.
“I hope the meeting to discuss this will clearly define Hamtramck as a place that values/respect and welcome for all people.”

In his inaugural address, Mayor Ghalib said that his administration will not be one of “division, favoritism and exclusivity.”
He also stressed that message during his victory speech, saying he will represent all “no mater your faith, your background, who you love or your political views.”
Former Mayor Karen Majewski said that if the flag is forced to come down there will be backlash.
“If this is indeed the case, be assured that many people are already working on a media blitz and public protests. Stay tuned,” she said.

The mayor responds to the pride flag issue
The Review asked Mayor Ameer Ghalib to comment on the pride flag being flown on a Jos. Campau flagpole, and in a Facebook message he said:
“The mayor didn’t and will not do anything about it. It’s not my issue, it’s a divisive community issue made by the person who solely decided to rise it in Jos. Campau for the first time from a commission that its main mission is supposed to be bringing people together.
“I told Kathy and Max to talk to him about the basis of his decision and he admitted that there was miscommunication and misunderstanding and he thought as he said that his conversation with Kathy last year gives him the right to do it this year based on the resolution that was specific for the Zussman Park flag.
“He knows that it’s a sensitive topic, so the city manager didn’t authorize it neither the city council or the mayor knew about it. There was no meeting for the human relation commission and no quorum for a huge decision like this one to be taken. The last meeting for this commission was January 2021.
“So, I asked the city manager to talk to him and see if there is a possible solution for this issue because the other side of the community blames us thinking we decided on that matter while we didn’t know about it. I was told by the city officials that the DPW is ready to take it down, and I told them no don’t do that!
“If one side does things irresponsibly, we would react in a responsible way and solve things peacefully because we care about the unity of our community but apparently some people don’t and they want this issue to go even further.
“I didn’t decide to do anything about it, but the people who created this issue need to deal with the opposing side of the community. The mayor didn’t decide to take it down but refused to let the DPW to take it down and max knows about that.
“We need things to be done through the proper channels and that way we maintain peace and unity of this community.”
Posted July 16, 2022
Updated on July 17, 2022