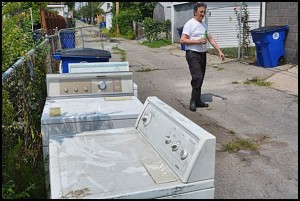 If you suffered damages to your house or lost appliances from last August’s flood, there is still time to make a claim with FEMA.

By Charles Sercombe
If you haven’t filed a flood damage claim already, there is still time to do so.
FEMA, the national disaster relief agency, has extended its deadline to file a claim to Dec. 14.
On Aug. 11 thousands of metro area residents found their basements flooded after a massive rainstorm. Many households were forced to throw out sewage-soaked furniture and drywall after flood waters forced sewers to back-up.
Hamtramck households also suffered damage in the flooding.
FEMA has been handing out financial aid in the form of a low-interest loan.
To file an application for help, follow these steps:
•    You can register online at www.DisasterAssistance.gov.

•    You can also register by smart phone or Web-enabled device at m.fema.gov.

For those who want to speak to someone from FEMA face-to-face, the Disaster Recovery Center remains open in Wayne County at the Wayne County Community College Welcome Center, 8200 West Outer Drive in Detroit.
There is also a center closer to Hamtramck in Ferndale’s Kulick Center, located at 1201 Livernois.
You are not required to take a loan even if you qualify, but if you don’t qualify for a loan you may be eligible for additional grant assistance from FEMA.
Homeowners and renters in Macomb, Oakland and Wayne counties who suffered damage during the August flood and received a letter from FEMA saying they do not qualify for disaster assistance have the right to appeal. An applicant has the right to appeal within 60 days from the date of the letter. The appeal must be in writing.
In Hamtramck, there have been over 1,000 claims filed. About 800 properties have been visited by FEMA investigators. Accompanying FEMA inspectors have been Hamtramck building inspectors.
Emergency Manager Cathy Square said she is sending city inspectors out in case there is a lawsuit filed against the city, which happened after a previous flood several years ago.
Square said she wants to make sure the claims are legitimate. One unintended consequence of the city inspections is that new improvements are being found, such as new furnaces and new additions to houses.
That has resulted in the city seeking permit fees for the unregistered improvements.

One Response to Flood help extended