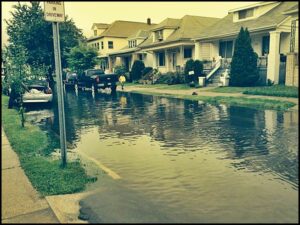 By Charles Sercombe
The summer of 2021 will likely go down in the history books as the year of the flood.
On Saturday evening, a torrential downpour in the metro area caused widespread flooding – for the third time in several weeks.
Weather experts say these downpours may become the new norm, because of climate change.
Residents are understandably fed up, and vented their frustrations on social media.
“The citizens of Hamtramck don’t deserve this. We need to have a Town Hall Meeting with City Officials, Administration, Council and the Mayor and maybe State Officials,” said Diane Elizabeth, on a Facebook page called Hamtramck Square.
“Enough is Enough. Many of us don’t have resources or assistance with continuous flooding. Most of us are renters. We have lost time, money, property and items. But it doesn’t matter, we’re all suffering!”
Some residents are blaming the recent road reconstruction of Holbrook and Caniff for the continued flooding.
Others are blaming Mayor Karen Majewski, even though she does not do the day-to-day management of the city.
Nasr Hussain, a critic of both the mayor and city administration, had this say on Facebook:
“How a new mayor and council can solve the flooding problem?
“1: Identify the low spots in Hamtramck where flooding occurs.
“2: Buy former American Axle property and turn it into a huge retention reservoir, in addition city owned vacant lots can also be used.
“3: Connect all these low spots directly to this pond to store water there and release it after the storm is over.
“Stop listening to the city lies that the problem can’t be solved. Vote for a new council and mayor who will work together to solve our flooding problem.”
Mayor Majewski said she realizes residents are upset, but stressed the problem is bigger than Hamtramck.
“People are frustrated and stretched to the breaking point. It’s become very clear that the nonstop flooding is a systemic issue across the region, the result of old and inadequate infrastructure and increasingly severe weather events brought on by climate change,” Majewski told The Review.
“These problems require not only a lot of money to fix, but regional, even global, solutions. Hamtramck has a plan to address our problem incrementally, but lacks the funding for more aggressive solutions.
“So we will continue to work with our county, state, and federal partners to not only secure funding, but to be part of what has to be a system wide investment.”
Hamtramck’s city administration has, in fact, done an exhaustive study of the city’s water and sewerage system, and according to engineers, there is a fix.
But it will cost $40 million.
That fix involves connecting the city’s drainage system to a large underground pipe that lies beneath Conant Ave.
The city has also taken the first steps toward making that goal happen.
But the question remains whether any system could handle the amount of water that rained down in just those few minutes. It’s an issue many metro cities are grappling with, including the Gross Pointes, Dearborn and Detroit.
At Tuesday’s city council meeting, City Manager Kathy Angerer gave a brief overview of what steps the city has taken to begin addressing the problem.
Thanks to federal grants, the city replaced sewer lines at Denton and Jos. Campau, and the city is about to replace lines on Goodson St. to Lumpkin.
“It’s been too long that Hamtramck has suffered this (flooding), but it takes money to fix this,” she said.
Angerer said she has reached out to county, state and federal officials seeking financial aid to upgrade the city’s entire sewer system. Some parts of the system are 100 years old.
“I wish right now to go build $80 million-worth of sewer, but it’s not possible for the city,” Angerer added.
In the meantime, there is help for residents offered by the federal government through FEMA. Those who suffered damaged appliances and/or any housing structural issue can apply for financial relief.
To find out more, go online at: www.fema.gov/disaster/4607
Or, you can call 1-800-621-FEMA (3362).
Posted July 30, 2021