For immigrants, learning English is their first step in a new country 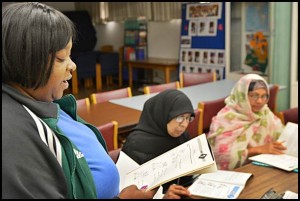 Latisha Hill is the instructor for English as a Second Language at the Hamtramck Public Library. The course has allowed many immigrants to assimilate easier into American life.

For Moyur Ahmad, learning the English language isn’t just about being able to communicate.

“English is essential for everything and everywhere,” Ahmad said. “Every office, jobs, stores, everywhere (and everyone) uses English.”

Ahmad previously attended Horizon Adult Education for six months before transferring to the English as a Second Language class taught in the public library.

He has attended for a year-and-a-half now. Ahmad immigrated to America 25 years ago from Bangladesh and eventually settled in Hamtramck in 2001.

He said by taking the ESL classes, he not only improved his English, but he also found it easier to apply for jobs.

To help immigrants transition to living in America, the Hamtramck Library offers English as a Second Language class for adults three times a week. Currently, the class is scheduled from noon to 1 p.m. on Tuesdays through Thursdays.

The instructor, Latisha Hill, who started off as a volunteer for the program, has been teaching the class for two years. Over the years, she said she has “seen a lot of progress” from her students.

“I’ve had family members come to me and tell me, ‘My dad’s learning. He understands what we’re saying to him now.’ And this makes me proud,” she said. “I feel like I’m doing something to help out my community.”

Although the class is limited to 45 students each term, at the moment there are 68 pupils attending the ESL class. Hill said since the Horizon language program closes in the summer, they send a few of their students to her. 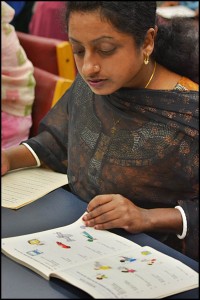 An adult student works on her English reading skills at the public library.

The students, she said, are hungry to learn.

“Sometimes the students don’t want to leave me, so they’ll just stay.”

A majority of them have been with her for the two years she has worked there, and while she keeps most of her students, she “always makes room for new (applicants).” However, she has had to deny some students a place in her class due to limited space this year.

According to the American Educational Research Association’s article, “Adult Literacy: The Next Generation,” this situation is common throughout the nation.

The article says that ESL will “be one of the major areas of literacy work in American adult education. (However), it has, to date, been given far too little attention.”

Hill tries her best to assist as much as she can to improve adult literacy in her class. Although the registration deadline for the fall ended on Sept. 14, she will accept more students in the summer at the end of May.

Taking place in a classroom-like setting inside the library, each student is assigned a workbook to take home to practice. Students are also offered dictionaries that contain translations from foreign languages such as Arabic, Bengali, Bosnian and Polish to English.

Hill said students start off with learning basic grammar, the alphabet and phonetics. As they progress, the class will delve into reading comprehension, where they read and discuss questions and answers as a group.

They also have open discussions about their families, daily lives and culture. The ESL class also gives students the opportunity to create resumes, fill out job applications and prepare for interviews. 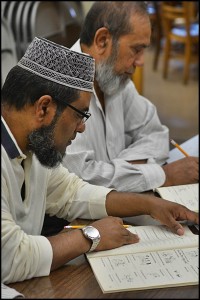 The gateway to success in America.

Hill said the hardest part of her job is assisting someone who cannot speak English at all. She said she overcomes this challenge by finding “something that she and students can do where they can interact with each other.”

Regardless of the challenges she encounters, Hill said she enjoys her job.

“They say if you love what you do, you’re never working,” she said. “I love my students, so it’s not really like work to me.”

Hill tells her students that they should “prepare to work and have fun” if they are interested in joining her class.

4 Responses to For immigrants, learning English is their first step in a new country