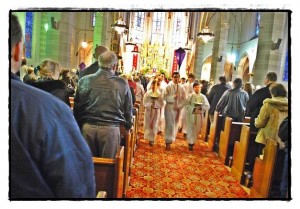 By Greg Kowalski
Special to The Review

“Once more the Christian world falls silent – once more humanity pauses in its daily task to stand in mute and reverent contemplation before the profound and earth-shaking mysteries of the Crucifixion and the Resurrection.”

For years, those words appeared religiously in a front page story on the Hamtramck Citizen newspaper in the edition on the Friday — Good Friday — just before Easter.

“Three hours of peace and still will descend upon Hamtramck at noon today with the beginning of Tre Ore services simultaneously at St. Florian, St. Ladislaus and Our Lady Queen of Apostles.”

“Tre Ore” is the three-hour period between noon and 3 p.m. on Good Friday that commemorate the time Jesus spent on the cross before He died.

For Christians, it is a sacred period, a time of quiet worship and reflection, when work and play are to be suspended and all are supposed to spend at least part of that time in church.

But is that front page news?

In Hamtramck it was.

For many years, Easter was more than just a religious observance in the city. It was part of the culture. Between noon and 3 p.m. on Good Friday, Hamtramck virtually shut down. All businesses closed. City Hall shut its doors. There was virtually nothing to do except go to church, and people did, by the thousands.

Almost all Hamtramckans were Christians at that time. They were immigrant Poles who came to work at the Dodge Main factory or the 23 other factories that sent smokestacks into the city’s sky in the 1920s. They brought a deep connection to the Catholic religion with them from the Old Country, which was overwhelmingly Catholic. It was said in those days no Polish person would build a house unless he could see a church steeple out the window. 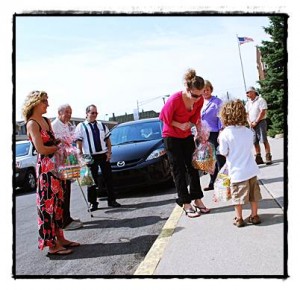 They were willing to make great sacrifices for their faith, including tapping into their meager paychecks to pay for magnificent — and expensive — structures like St. Florian.

But they weren’t the only Christians. The city’s African-American population also was deeply faithful. Corinthian Baptist Church, St. Peter’s AME church and several other smaller Baptist churches were an integral part of the makeup of Hamtramck, and remain so to this day.

For all, Good Friday was part of the Easter celebration. Once the stores reopened after 3 p.m., many people headed to the bakeries to buy bread and butter lambs for the Easter meals. This was a busy time for New Palace, Home, Paris and the other bakeries in town.

Then, as now, people colored eggs for Easter, but in the earlier days of the 20th century the eggs usually were dyed a brownish orange in a bath of boiled onion peels or beets.

The meat, butter and eggs, along with salt, would be placed in an Easter basket, which would be taken to church on Holy Saturday for the traditional blessing.

For the ladies, Easter was also a time to look their best. In 1942 Skippy’s Beauty Salon offered “New styles for Easter.” A regular $6.50 permanent could be had for $3.

Just down the street on Jos. Campau, Ringgold’s — “Hamtramck’s Largest Family Shoe Store” — advised: “Make it a family affair when you go shoe-buying this Easter. Krohngold’s has beautiful new styles for men, women and children.”
Men’s shoes started at $2.99 and women’s were $2.49 and up.

Florian Greenhouse, just across the street from St. Florian Church, was bursting with Easter lilies.
“Say Happy Easter with flowers,” it advised.

Belmont Sweet Shop offered an array of Easter candy and a chance to win a “New Bright Electric Eyes Bunny,” whatever that was.

There were other traditions as well, like the sale of Easter Seals and dressing in the fine clothes and “Easter bonnets” for Sunday Mass.

Mass was the religious centerpiece of the day. Sunday began with 5 a.m. Mass, with others to follow at 10 a.m. and noon. And everyone looked forward to Easter dinner.

Lent was over, the fasting was done and it was time for feasting on ham, kielbasa, boiled eggs, sauerkraut, fresh bread, beet soup and much more.

It was a time for the family to gather, sharing food and time together.

And that, like the underlying spirit of Easter, hasn’t changed a bit.