For now, it’ll be a bumpy ride before street repairs 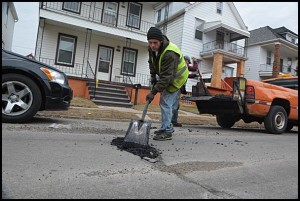 Don’t expect anything more than cold patching for city streets. Anything more permanent will have to wait until a city manager is hired.

By Charles Sercombe
Just how bad are Hamtramck’s streets?
As everyone has experienced by now, just about every street has potholes. But if you need further proof that winter’s ice and snow caused severe damage, look no further than on Jos. Campau, just south of Yemans.
Exposed there is a rare glimpse of Hamtramck’s past: a portion of the steel rails that streetcars travelled on in the early decades of the 20th century. (Read more about Hamtramck’s streetcars on page 8.)
Those rails haven’t been seen since the city ground down Campau to repave it back in the early 2000s.
So what’s going to be done about the potholes?
The only plan so far, said Emergency Manager Cathy Square, is continue with cold patching. Anything bigger than that, she said, will be up to whoever is hired as a city manager and takes over once she leaves at the end of June. 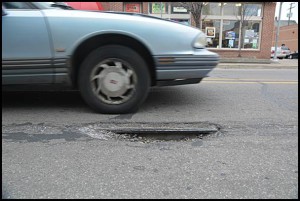 If you look close, you can see the old streetcar rail exposed on Jos. Campau near Yemans.

There is a good chance that Lansing will be extending a helping hand. State legislators are considering freeing up hundreds of millions of dollars to help cities fix their damaged streets.
Most of Hamtramck’s 53 streets have been waiting a long time for some attention. At best some streets received a light repaving in recent years, but most of them have not been resurfaced since they were first paved who knows how many years ago – several decades at least.