For now, no clucks here or there 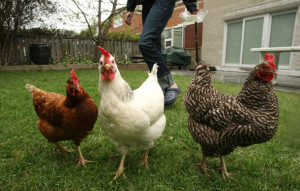 Chickens are not welcomed in Hamtramck. However, if you are a duck or a turkey, that’s a different story.

By Charles Sercombe
Hold off on installing that chicken coop.
Or, maybe go ahead and do it and raise chickens, but don’t cause a fuss with neighbors or get caught.
Or something like that.
Confused? You’re not alone.
The discussion at last Tuesday’s city council meeting over whether to rescind allowing the raising of chickens was all over the place, but here’s what ultimately happened:
In a 4-3 vote, the council amended a recently passed animal control ordinance that now bans the raising of chickens, but does allow the raising of other fowl, such as ducks and turkeys.
City Councilmember Robert Zwolak said that although he wants to remove the raising of chickens from the animal ordinance, he said it will be all right for residents to have them as long as neighbors don’t complain.
Zwolak has been consistent in his opposition, but Councilmembers Anam Miah, Mohammed Hassan and Abu Musa changed their mind from supporting the raising of chickens just a few weeks ago to being against it.
What happened?
Hassan, who introduced the amendment to put a halt to chicken raising, said at first that he talked with 200 families — and then later said it was 300 families — who all expressed concern over the issue.
He said they objected because houses in the city are too close together.
Hassan encouraged the matter be put to the voters to decide.
Councilmember Miah said although he has “no issue” with raising chickens, he changed his mind after his parents talked to him about their reservations. They told him “we don’t want to live on a farm.”
Councilmember Musa said having chickens in the backyard was too much like living in Bangladesh.
“In my opinion, chickens cannot be here,” he said.
There was plenty of support from the pro-chicken faction.
Hillary Cherry said the new-found opposition was nothing more than “political pandering.”
Neal Yaremchuck agreed, saying that several weeks ago there were no “philosophical arguments” against it. Now, he said, it appeared some councilmembers were “pandering” to business owners.
(Councilmember Hassan previously said he talked with restaurant owners who objected to allowing residents to raise chickens.)
Xavier Talvela said the issue was about “personal freedom.”
Mayor Karen Majewski, a proponent of home-raised chickens, said this is part of a larger movement other cities are embracing to allow people to get back to raising their own food.
“It’s an important step for Hamtramck to take,” she said.
Two years ago, the City of Ferndale passed an ordinance allowing chicken coops in backyards. At first some city officials were hesitant, but later opened up to the idea.
In the two years since, Derek Delacourt, Ferndale’s Director of Economic Development, and the person in charge of overseeing permitting for chicken coops, said there have been “little to no issues.”
Ferndale is twice the size of Hamtramck but has a slightly smaller population of 20,000. Delacourt said there have been six to 10 permits issued for the raising of backyard chickens.
He said he expected that there would be a low demand for the permits.
So, as of now, in Hamtramck chickens are out, but ducks and turkeys are OK.

2 Responses to For now, no clucks here or there